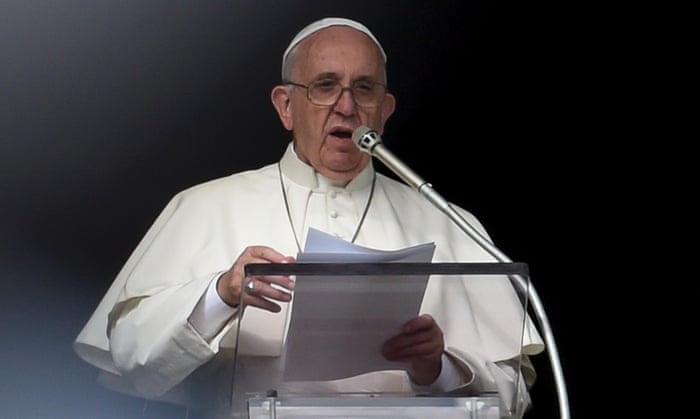 Pope Francis has called for a sustainable solution to the migration crisis. Photograph: Andreas Solaro/AFP/Getty

(SOURCE)   Pope Francis has called for a bold and creative strategy to deal with global migration, insisting Europe has the means to absorb refugees without sacrificing its security or culture.

In a speech on Monday to the Holy See’s diplomatic corps, the pontiff lamented the distinction made by the international community between refugees fleeing persecution and those fleeing poverty.

Human history had been marked by great waves of migration, and humanity today must not let security fears replace the principle of respecting the dignity of others, he said.

“The present wave of migration seems to be undermining the foundations of that ‘humanistic spirit’ which Europe has always loved and defended,” the pope said in an annual address to diplomats in Vatican City.

But, he said, he was sure Europe could find “the right balance between its two-fold moral responsibility to protect the rights of its citizens and to ensure assistance and acceptance to migrants”.

He called for dialogue to begin among the countries of migrants’ origin, transit and reception “so that with greater boldness and creativity, new and sustainable solutions can be sought”.