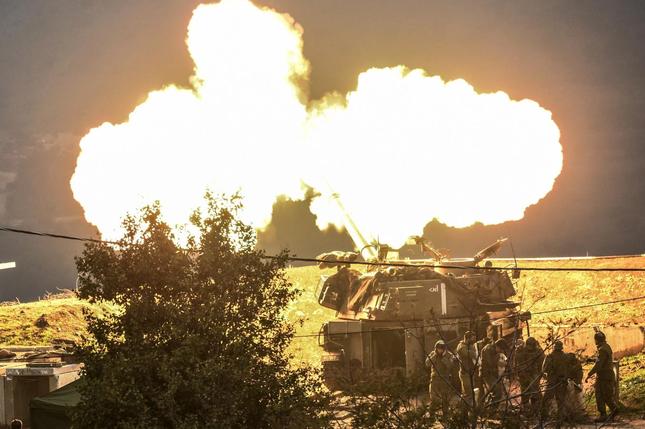 An Israeli artillery gun fires a shell into Lebanon, after a roadside bomb exploded next to an Israeli military border patrol near the Shebaa Farms area on Monday, near Kiryat Shmona, Israel, January 4, 2016. Reuters/Ancho Gosh/Jinipix

(SOURCE)   Hezbollah set off a bomb targeting Israeli forces at the Lebanese border on Monday in an apparent response to the killing in Syria last month of a prominent commander, triggering Israeli shelling of southern Lebanon.

Israel has struck its Iran-backed Shi’ite enemy Hezbollah in Syria several times, killing a number of fighters and destroying weapons it believes were destined for the group, whose support for President Bashar al-Assad has been crucial in the country’s civil war.

Hezbollah said in a statement that the explosive device had been detonated in the Shebaa farms area and carried out by a group whom it named after Samir Qantar, a commander killed in December. The group has accused Israel of killing Qantar in an air strike in Syria, and vowed to retaliate.

Lebanese media said Israeli shelling had hit the nearby town of Al Wazzani and other areas, with reports of material damage but no serious injuries.

A Reuters witness said the shelling had stopped later in the day. Al Manar TV reported that calm had returned to the Shebaa area.

Israel stopped short of confirming responsibility for the strike that killed Qantar, but welcomed the death of the militant leader, who had been jailed in Israel in 1979 and repatriated to Lebanon in a 2008 prisoner swap.

Hezbollah did not say which role Qantar played in the Syrian conflict, but Syrian state media said he was involved in a major offensive earlier this year in Quneitra, near the Israeli-occupied Golan Heights.

Hezbollah is fighting on the side of Assad in Syria’s civil war. The conflict has exacted a heavy toll on Hezbollah, with many hundreds of its fighters killed.

In January last year, an Israeli helicopter attack killed six Hezbollah members including a commander and the son of the group’s late military commander Imad Moughniyah. An Iranian general was also killed in that attack.

Two Israeli soldiers and a Spanish peacekeeper were killed later that month in one of the most violent clashes between the two sides since a 2006 war.

Israel and Hezbollah have avoided large scale confrontation along their 80-km (50-mile) frontier since the 34-day war in 2006, which killed 120 people in Israel and more than 500 in Lebanon.

Nasrallah has made repeated threats against Israel since then, part of what is seen as a calibrated policy of deterrence.