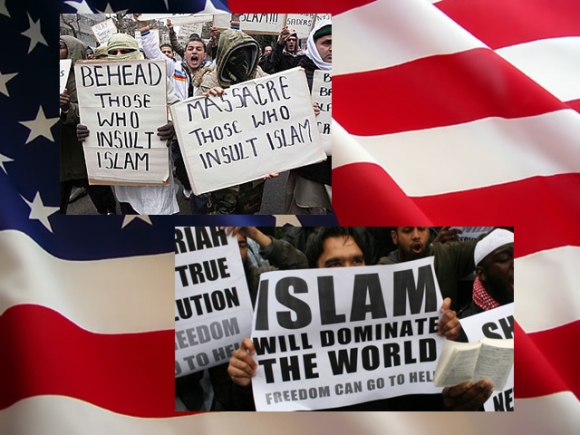 Islamic terror in America is not only a possibility it is now a reality!  It’s here and will only get worse my friends.  The recent mass shooting in San Bernardino California is only one incident of Islamic terror and violence in America.  We know of many other incidents and shootings, but just how many other incidents are occurring which are not even being associated with Islam?

If we are to take a stand and fight against this evil, then we must know what and who are the ones attacking us.  By turning our heads, by not acknowledging that these terrorists are Muslims, and by labeling these attacks as merely isolated incidents, then we will never succeed in defeating them.

Our own President, Barack Hussein Obama, refuses to acknowledge that these terrorists are Muslims, he refuses to state that most of these victims were Christians, and he refuses to inform the American people of the whole truth.  He is misleading the public by telling us that the only way to stop this evil is by more gun control!

Obama’s foreign policy in the Middle East is no different, and it should give us some clues as to how he will handle the situation here in America.  He says that he wants to defeat ISIS, yet he arms them with weapons, who do you think these rebels are fighting against Assad?  He refuses to arm the Kurds, the only successful force in Iraq able to defeat ISIS.  He refuses to send boots on the ground to defeat ISIS, yet we have seen over and over again that sporadic bombing has no real or lasting effect.  He even refuses to call the members of ISIS Muslims!  And he never refers to ISIS as ISIS, but as ISIL!

The President made a public address on September 10, 2014 in which he said:

“Now let’s make two things clear: ISIL is not “Islamic.” No religion condones the killing of innocents, and the vast majority of ISIL’s victims have been Muslim.”

Yet, the Quran absolutely does condone killing, it not only condones it, it mandates it!  The following are only a few verses about killing, fighting, and murdering found in the Quran, there are many more.

Quran (3:151) – “Soon shall We cast terror into the hearts of the Unbelievers, for that they joined companions with Allah, for which He had sent no authority”.

Quran (4:89) – “They but wish that ye should reject Faith, as they do, and thus be on the same footing (as they): But take not friends from their ranks until they flee in the way of Allah (From what is forbidden). But if they turn renegades, seize them and slay them wherever ye find them; and (in any case) take no friends or helpers from their ranks.”

Quran (5:33) – “The punishment of those who wage war against Allah and His messenger and strive to make mischief in the land is only this, that they should be murdered or crucified or their hands and their feet should be cut off on opposite sides or they should be imprisoned; this shall be as a disgrace for them in this world, and in the hereafter they shall have a grievous chastisement”

Quran (8:12) – “I will cast terror into the hearts of those who disbelieve. Therefore strike off their heads and strike off every fingertip of them”

Quran (8:39) – “And fight with them until there is no more fitna (disorder, unbelief) and religion is all for Allah”

Quran (9:29) – “Fight those who believe not in Allah nor the Last Day, nor hold that forbidden which hath been forbidden by Allah and His Messenger, nor acknowledge the religion of Truth, (even if they are) of the People of the Book, until they pay the Jizya with willing submission, and feel themselves subdued.”

Do these sound like words of love and peace?  These are words taken directly from the Quran!  Is this the religion of peace that President Barack Hussein Obama is speaking of ?  Did he not say that “no religion condones the killing of innocents”?  I guess he believes that if you do not believe in and worship the god of Islam then you are not innocent?!

So just what will President Obama’s response to Islamic terror in America be?  So far, the president has denied the fact that all of these terrorists are Muslims.  He has not mentioned once that the victims of most of the attacks were Christians.  He has not yet stated that Islam is attacking American citizens, and he never will.  His defense of the American people has been to push for more gun control, disarming the very people he should be defending!

President Barack Hussein Obama refuses to take the lead for the rest of the world, he has created a void in which another world leader will fill.  And it looks to me as if President Vladimir Putin is filling that void, at least for the time being.  President Obama has not only weakened America, but the world.  The world used to look to America for leading them in the right direction, now they have nowhere to turn, and as it stands chaos abounds!

Is this the fate of America?  Is the President leading us in the right direction, or is he misleading us and creating chaos and division?

The lack of leadership and the lack of strong, firm decisions from the American President is seen by most of the world as weakness.  This can be seen while President Jimmy Carter was in office.  What happened back in 1979, does anyone remember?  I do , because I was there in the Persian Gulf for several years while in the U.S. Navy.  Iranian terrorists took our American embassy and citizens hostage in Tehran, Iran.  Sixty six Americans held hostage for four hundred and forty-four days (a few were released prior to that time).

I was a part of the Naval battle group from which President Carter sent two marine helicopters with fourteen U. S. Marines on a mission to rescue the hostages.  The mission was a failure and a complete loss of life for all of the marines!  The helicopters crashed into each other in the desert and all marines on board were killed.  I remember this like it happened yesterday.  And what did Carter do after that?  Nothing!  Absolutely nothing!  Most of the sailors on-board my ship were saddened and grieving for the loss of the marines lives, but we were also angry with the President for aborting the mission!  We wanted him to send in a huge force and rescue our fellow Americans!  But he didn’t, because he was weak.  It was not until President Ronald Reagan was sworn into office that the American citizens were released.

This is when the Shah of Iran was deposed and Ayatollah Khomeini took power and control, in 1979.  This was the Iranian revolution, the beginning of most of the terror in the world during our modern time.  The United States of America is not new to this terror, it’s been around since 1979, just not on American soil!  Lets also not forget about the bombing of the American embassy and the bombing of U.S. Marine forces in Beirut, Lebanon in 1983.

So just who were these terrorists that performed these heinous acts against America?  It was Hezbollah, backed and formed by Iran of course!

And what about the bombing of the USS Cole in Yemen, have we already forgotten? 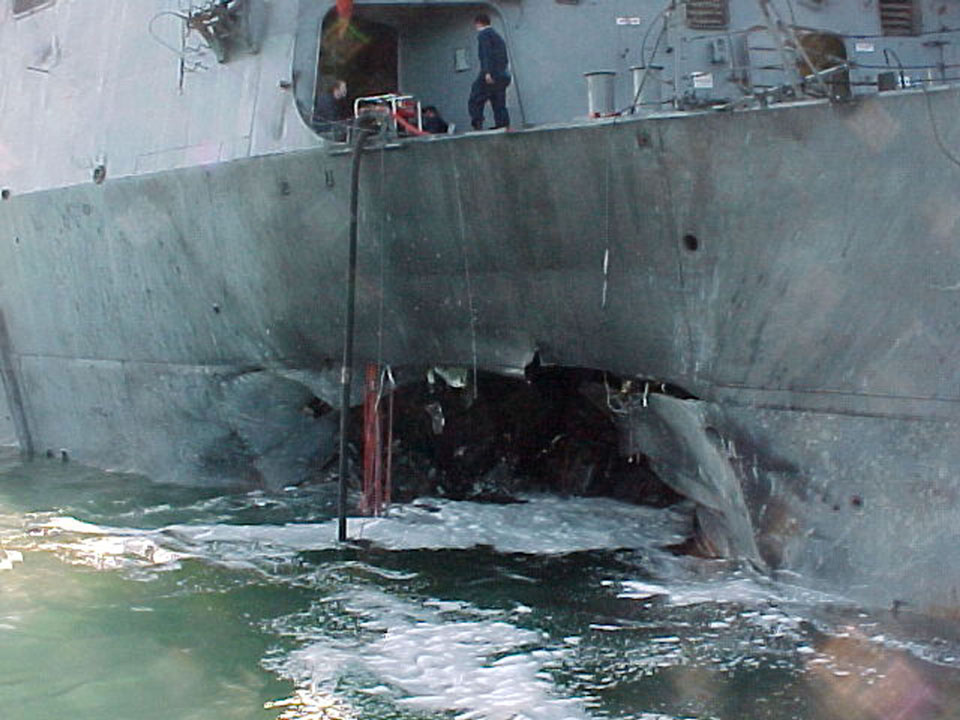 The USS Cole was bombed on October 12, 2000, seventeen sailors lost their lives, and another thirty-nine were wounded.  The attack was thought to have committed by al-Qaeda.

There are many other incidents in which Islam has attacked America on foreign soil, where American lives have been lost.  But have we actually ever called them out, have we identified them as terrorists and Muslims, or merely terrorists?

Lets not be naive, these terrorists are Muslims, there is no doubt about it, and they have no shame in admitting it either!  Yet, for some reason the world just can’t label them as Muslims.

The point is folks, that we have been at war with Islam for decades now, this is nothing new.  What is new is the intensity of the fight, the global scale of the fight, and the fight coming home, on American soil.

Why does Obama refuse to label these terrorists for who they really are?  Why does he refuse to admit that these terrorists are Muslims?  Why will he not speak up about the hatred and crimes committed against Christians?  Why is he so adamant about taking away the rights of the American citizens to own and bear arms?  Why does he want us to be defenseless against those who wish to do us harm?  Why is it that he will not call ISIS by their name, but instead calls them ISIL?  Why will he not take a firm stand against ISIS in the Middle East?  Why is he allowing tens of thousands of Syrian refugees into the country?  Why will he not secure our Southern borders?

These are serious questions that we need to be asking ourselves.  It’s time to wake up!  Don’t turn a blind eye to what is happening in the world, don’t be fooled and deceived into believing that Islam is a peaceful religion.  The writing is on the wall my friends!  While there are peaceful Muslims, it is because they are not being true to their faith.  When times get tougher and their backs are against the wall, will they choose to side with the radicals or not?  If their lives are threatened will  they become more radical, will they then be true to the teachings of the Quran?!  And if so, then how many of them now living in America and Europe will terrorize as well?

We are sitting on a ticking time bomb!  It’s not a matter of if, but when.

Wake up!  Be aware!  Do the right thing!  Support those who support our Father in heaven.  Give heed to sound doctrine.  Pray for the righteous to increase our faith, to give us strength and courage, and to protect us from the evil ones.  Pray for the lost to see the light, to uncover the truth, to repent of their sins and accept Jesus Christ as their Lord and Savior!  Pray for the persecuted to have protection, peace, and comfort.

This is not a time to fear, but to have hope in our Lord and Savior Jesus Christ!  It’s a time to stand firm in your faith and your trust in God.  He is in control, and He has already won the battle.

4 thoughts on “Is this the beginning of Islamic Terror in America?”