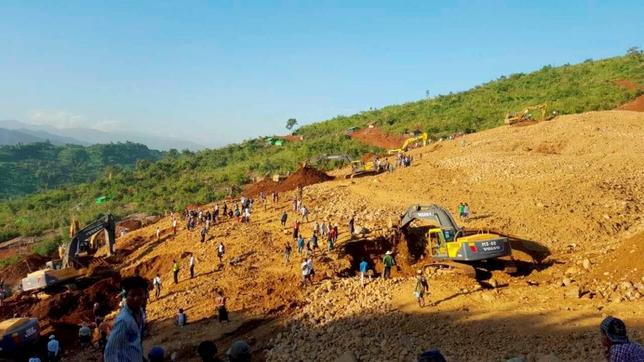 (SOURCE)  Nearly 100 bodies have been pulled from a landslide near a jade mine in Myanmar’s northern Kachin State and an estimated 100 people are still missing, a rescue official said on Sunday.

The landslide happened in the early hours of Saturday in Hpakant, an area that produces some of the world’s highest-quality jade, but the mines and dump sites for debris are rife with hazards and landslides are not uncommon, though rarely this deadly.

Workers, many of them migrants from other parts of the country, toil long hours for little pay.

The state-run Global New Light of Myanmar newspaper said that many of the miners were sleeping in huts when the landslide occurred.

An official with the Hpakant Township Fire Brigade told Reuters by telephone that 99 bodies had been recovered by late Sunday afternoon and that this number was likely to rise.

“We are sure the death toll will go up since many are still missing,” he said.

The official, who asked not to be named because he was not authorized to speak to the media, said that the accident occurred near a mining site controlled by Triple One Jade Mining at around 3 a.m. on Saturday.

It was unclear as to what triggered the landslide in the remote and mountainous region that is almost entirely off limits to foreigners.

A lawmaker also confirmed the figure. Zaw Htay, a senior official from the President’s Office, said that rescue efforts were being carried out by local authorities.

“Responsible officials from Kachin State government are taking care of rescue and relief works,” he said.

Myanmar’s jade industry is extremely opaque and much of the jade that is mined in Hpakant is believed to be smuggled to neighboring China where the stone is highly valued.

According to researchers from environmental advocacy group Global Witness, which published a comprehensive report on the sector earlier this year, the value of jade production in Myanmar is estimated to have been as much as US$31 billion in 2014.

Many of the jade mines are connected to government officials, members of armed ethnic groups and cronies with close ties to the former military government, the group found.

Safety measures at the mines and surrounding dumping sites are minimal.

“These crony-owned mining companies piled this giant mine dump near the village without any consideration for the safety of the village that has existed all along,” the fire official said.