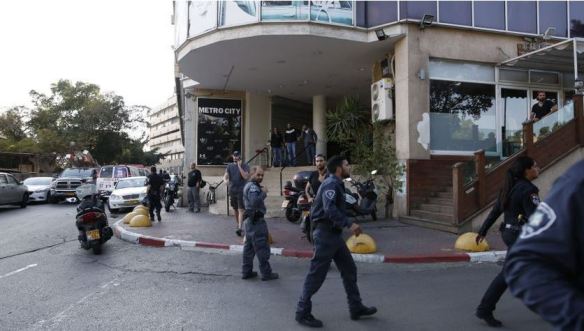 The scene of a stabbing attack in Tel Aviv, November 19, 2015.Haaretz Moti Milrod

(Yaniv Kubovich and Haaretz)    A man in his 20s was killed and two others were wounded in a stabbing attack on Ben Tzvi Road in Tel Aviv on Thursday afternoon. One of the victims is in serious condition and one is in moderate condition. The Palestinian assailant was lightly wounded and is in custody.

According to a Magen David Adom rescue services spokesperson, the stabbing occurred at the entrance to the Panarama Building in southern Tel Aviv. The assailant was apprehended by a traffic cop in the warehouse of a shoe store. Israeli Army Radio reports that police are searching for a second suspect.

The 24-year-old Palestinian assailant, from the West Bank town of Dura near Hebron, received a permit to enter Israel approximately a month ago. He told police investigators he entered in order to attack and kill Jews.

Magen David Adom paramedics Moshe Danenberg and Yonit Niviv were among the first responders and described the chaotic scene. “An unconscious 32-year-old man suffering from stab wounds was at the front of the building. He did not have a pulse and was not breathing. Next to him was a man in his 30s, who had stab wounds to his upper body.”

“We found a man in his 50s on the floor below the two,” Danenberg and Niviv continued. “All were given medical attention at the scene, then immediately evacuated to Ichilov Hospital.”

This is the first terror attack since last Friday, when Rabbi Ya’akov Litman and his son Netanel, were killed in a shooting attack south of Hebron in the West Bank. The two were driving with five other family members to a family event in the southern town of Meitar.

This is the first attack in central Israel in two-and-a-half weeks, when four people were wounded in two stabbing attacks in Rishon Lezion and Netanya. A 70-year-old man was seriously wounded in the stabbing attack in the coastal city of Netanya, while a 31-year-old man and 80-year-old woman were critically injured earlier that day in Rishon Letzion. A man in his twenties was slightly injured in the earlier attack.