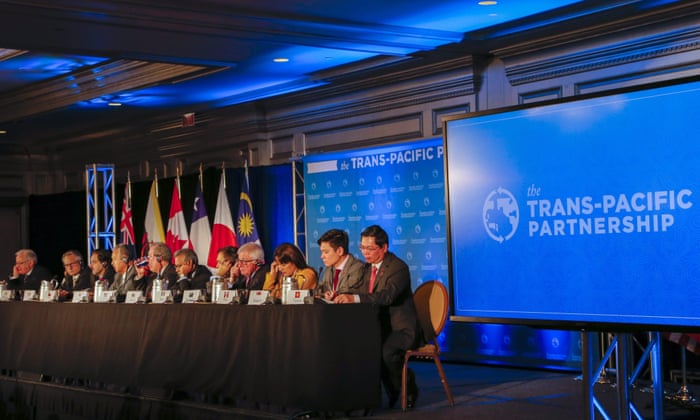 Trade ministers from the 12 TPP member countries in Atlanta, Georgia, where they reached agreement on the deal last month after secret negotiations. Photograph: Erik S Lesser/EPA

(SOURCE)   New Zealand has put the text of the Trans-Pacific Partnership (TPP) online, offering the first detailed look at the world’s largest free trade deal, the most ambitious effort in years to remove barriers to commerce.

The New Zealand government, which signed on to the deal, put the contents of the agreement on its website on Thursday, saying it would continue to undergo legal review.

Many activists have criticised the fact that the 12-state agreement was surrounded by secrecy, while critics also noted that signatory governments were forced to approve the unmodifiable deal in an all or nothing vote.

The accord must be signed and ratified by the respective countries and many may experience difficulties, not least in the US as it tries to convince a sceptical Congress.

Australia’s trade and investment minister welcomed the publication of the complete text of the deal, adding that TPP members had agreed to release details as soon as possible.

“Today’s release honours that commitment and provides the Australian public with an opportunity to examine the text and more fully understand any areas of the negotiation that are of interest to them,” Andrew Robb said.

Under the deal, most tariffs would be eliminated or reduced on everything from beef, dairy products, wine, sugar, rice, horticulture and seafood through to manufactured products, resources and energy.

The TPP also establishes mechanisms to handle disputes between foreign investors and governments. Proponents say such measures protect investors who fear local laws such as health and safety regulations could violate a trade deal and threaten their investments.

But opponents say it allows commercial interests to force governments to change laws at the behest of private interests.

Delegates from the dozen Pacific Rim states finally managed to hammer out an agreement in the US last month – five years after the Washington-led talks began.

Spanning about two-fifths of the global economy, the deal aims to set the rules for 21st-century trade and investment and press non-member China to shape its behaviour in commerce, investment and business regulation to TPP standards.

Those involved are Australia, Brunei, Canada, Chile, Japan, Malaysia, Mexico, New Zealand, Peru, Singapore, the US and Vietnam. The US and Japan are the two biggest economies involved but long appeared unable to find common ground on key issues, including auto sector access and Japan’s huge agricultural tariffs.