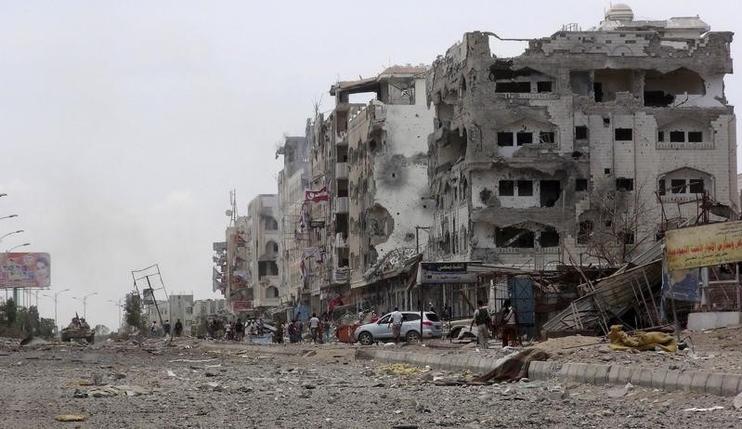 Damaged building are seen on a street after clashes between Southern Popular Resistance fighters and Houthi fighters in Yemen’s southern port city of Aden, May 8, 2015. Reuters/Stringer/Files

(SOURCE) By Angus McDowall   The shell holes, burnt-out tanks and endless rubble that now disfigure the Dar Saad neighborhood of northern Aden illustrate the violence of Yemen’s civil war and point to the challenges facing its other ravaged cities.

Even before the shells started to fall in Yemen early this year it was one of the poorest Arab states, suffering malnourishment, illiteracy, scant medical care, unemployment and weak infrastructure.

Now, after months of war that has left much of the southern cities of Aden and Taiz in ruins from shelling and street fighting, the northern city of Saada wrecked by coalition airstrikes, and many other areas extensively damaged, Yemen faces an acute crisis.

“Yemen is one of the most dire places anywhere,” said World Food Program spokeswoman Bettina Luescher in Geneva.

Battles between Gulf-backed forces against the northern Houthi militia and troops loyal to a former president continue in many parts of Yemen, but most fighting stopped in Aden in July, and efforts to resume basic services have begun.

Reuters toured the city on a visit arranged by the Saudi army, giving an early glimpse at the extent of its destruction, weeks after the end of four months of intense street fighting.

Dar Saad suffered more fighting than most other districts of the city because of its location on a main road north, but even here, the sight of women and children scurrying into an alleyway shows life is starting to return.

Inside Republic Hospital, one of Aden’s largest, but now lying empty, without electricity, and badly damaged by shelling on its first floor, a few workmen this week started to repaint a ward as engineers assessed the work needed to reopen it.

Work on the hospitals, on electricity stations, on schools and on restarting some form of police service, is being paid for by Gulf countries whose armed forces started a military campaign in March to restore President Abd-Rabbu Mansour Hadi to power.

ONE STEP BELOW FAMINE

The United Nations says at least 5,428 Yemenis have been killed in the civil war since coalition air strikes began on March 26, but beyond the direct casualties from warfare, many others may have died from a lack of food, medicine and shelter.

Outside Aden’s port, the country’s largest, container ships and tankers could be seen waiting their turn to dock. But a coalition naval blockade and an inability to deliver aid that arrives, has exacerbated the crisis, the UN says.

“Ten out of 22 governorates in Yemen are classified as facing food insecurity at emergency level, that is just one step below famine,” said Luescher.

Near the port, on the isthmus road to Aden’s peninsula, an elderly minibus taxi, its door open and with a yellow stripe along its white side, bumped past a flock of flamingos wading in the turquoise bay on one side, and a burnt-out car on the other.

The driver peered over the spiderweb of cracks spreading from two bullet holes in the windscreen as he drove a woman and child toward Abyan Beach, where the Eid holiday crowds had gathered to enjoy the golden evening sun and warm sea breeze.

Two headscarved girls buzzed along the sand on a quadbike, past a group of a dozen boys playing with an orange football that they had to keep retrieving from the waves.

But behind them, along the corniche, the pleasure pavilions and cafes where they might have reclined a few months ago now lay smashed, bullet marks peppering their concrete sides and their steel window frames twisted from explosive blasts.

When Yemen’s Vice President Khaled al-Bahah returned to Aden from exile in Riyadh after the Houthis and Saleh’s forces were evicted from the humid Indian Ocean city by Gulf-backed fighters in July, it was a ghost town. Now residents are moving back.

“Half its districts were completely empty. Nobody was there because the Houthis were there before. There was no water, no electricity. Just imagine coming to a city where there are no people,” he said.

On the once elegant main street along Mualla district, few of the tall apartment buildings were untouched by bullets or explosions and a large pool of dark sewage had gathered in one part of the road.

“Now it is coming back again. It is a little bit ugly, but it is recovering,” Bahah told reporters in Aden’s Qasr Hotel, where Hadi’s government has been based since its gradual return from exile in Riyadh over recent weeks.

Everywhere outside, large groups of children played in the streets, gathering on corners where dusty, uneven pool tables and table football games had been set up, and standing near grocer shops to suck sweet pink confectionary from plastic bags.

In one dense neighborhood, where two shellpocked houses showed where the Houthis had set up a base during the fighting, Mohammed Salim Abu al-Jaid stood by the roadside selling potato chips from a metal fryer, three young daughters standing nearby.

“All the people left here when the Houthis came. After Ramadan we came back. The situation now is very good,” he said. But behind him, a stinking pile of uncollected rubbish rotted in the road and, in the absence of police, a group of armed men lounged on the corner opposite.

(This version of the story was corrected to change toll to all Yemenis killed, not just civilians)