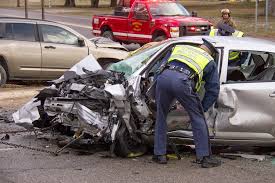 Photo for illustrative purposes only, not actual photo of my accident.

Hello folks and friends, I’m back from a rather eventful trip to say the least.  I am going to give you some more details of my accident, however, rest assured that I will not be continuing to write about it, unless of course it brings glory to God!

As you already know, I was in a serious motor vehicle accident on Friday, the 17th of July.  My truck was destroyed to the point of being permanently out of commission, yet thank the good Lord, I am in one piece.  I am having some physical aches and pains, nothing of which seem serious at this point in time, but I am having psychological and emotional distress.  Whatever becomes of this situation or my well-being, I am confident in my salvation and the promises of God Almighty!  I give Him thanks in all things, may He get glory and honor from this incident.

I do remember something unusual which occurred during and directly after the accident.  Immediately after my truck was hit by the other vehicle, a man appeared at the passenger side window.  He was asking me if I was ok, if I was hurt.  Everything seemed altered and in slow motion at the time.  As soon as he spoke to me, he was gone.  After a few minutes I was able to start my truck, then pull off to the side of the road.  I then exited my vehicle and the man reappeared.  He once again asked me if I was ok.  Then he told me that the driver ( a 22 year-old male) that struck me passed him earlier going between 80 to 90 miles per hour.  I walked around the rear of my truck to go and help the other driver, only to find him standing at the rear of the truck.  The man then asked the other driver if he was the one who passed him going 80 to 90 miles per hour, and the young man responded “nah”.  As the other driver was answering the man, I looked at the young driver to see his response, and immediately after I looked back towards the strange man, he was nowhere to be found.  He disappeared, vanished as if into thin air.  I saw no vehicle drive away, nothing!

There are several things about this incident that seem very strange and unusual to me.

First of all, this strange man seemed to come from out of nowhere, immediately, then vanished just the same.  Who was this strange man?  He appeared to be in the age range of about 40 to 50 years old, he had very short-cropped blonde hair.

Second, as I first looked at the other drivers vehicle, it appeared as a mass of twisted and mangled sheet metal.  One could not tell that it was even a car from the front.  I could see that the airbags were deployed and the doors were shut.  The thought went through my mind that no one could have survived that accident.  I did not see the young driver exit his car, nor did I have any idea how he did.  I would be absolutely amazed if either of the car doors were operational, and it would be difficult to believe that he could have made his way out of a window.

How did this strange man appear “immediately” after I was hit?  Where did he vanish to in a similar manner?  Why didn’t he stick around to give a police report?  These are questions which keep running through my mind.  The first thought that I had was that he was an angel sent by God.  How else could you explain his mysterious appearance and disappearance?  One could argue that I was in shock and nothing made real sense, yet I was cognizant of my situation and my surroundings.

How did this young driver escape such a horrendous accident, and how did he exit his vehicle?  You need to understand that his car was unrecognizable as a car from the front.  The only identifying mark was the Toyota emblem sticking out of the mass of mangled sheet metal.  How in the world did he get out of his car?  After he was out of his car and standing by me, I looked back at his vehicle and the doors remained closed.  The only thing that makes any sense to me is that the angel helped him out of his car.

The last thing which seems very strange and unusual is that both of us walked away from the accident.  We just got up and walked away.  Sure, many will say that these things happen all of the time, that it’s no big deal.  I say that it is a big deal, and that God had his hands on us both!

My truck has a license plate frame that says “I live for Jesus”, and a fish emblem with “JESUS” in the middle, glued to the back window.  I wonder if the emergency response or highway patrolmen looked at them?  I wonder if they thought: “God was with this man, surely God must have saved him”.   I wonder if God will use this to plant a seed of hope and faith into unbelievers who see these signs along with a mangled truck?

God will use this incident for his glory!  He will bring good from pain and suffering.  Many answers will remain unanswered, yet much more will be revealed through God’s Holy Spirit.

I thank God for each and every day.   I thank Him for all things, including this accident, because I know that good will come from it, according to His will.

Life is short, so very short.  You never know what will happen minute by minute.  The unexpected is waiting in our future, the not knowing of what or when it will occur.  Unbelievers do not know their future here on earth or their eternal future as well.  We as believers may not know what our earthly future holds, but we can be confident of our eternal inheritance through Jesus Christ!

Thank you Lord in heaven.  I come to you with a humble spirit, in submission to your will.  You have given me an extension of life on earth, a perspective of just how short and precious life really is.  To the unbeliever life has no real meaning, but to your children it is sacred!  You are the giver of life, the very breathe which gives us life.  Without you life is hopeless and futile, but with you we have hope, joy, and assurance.  Thank you God for your unconditional, unwavering, endless love for us all.  Thank you for the comfort and peace that only you can give.  Forgive us of our sins oh Lord, have mercy on our souls and wash us clean, although we are unworthy.  Thank you for the ultimate sacrifice you have made by the giving of your Son, Jesus Christ.  Amen