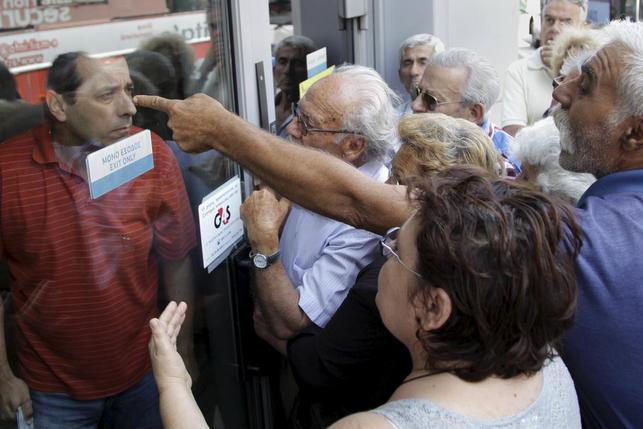 Pensioners waiting outside a closed National Bank branch and hoping to get their pensions, argue with a bank employee (L) in Iraklio on the island of Crete, Greece June 29, 2015. Reuters/Stefanos Rapanis

(SOURCE)  Stunned Greeks faced shuttered banks, long supermarkets lines and overwhelming uncertainty on Monday as a breakdown in talks between Athens and its international creditors plunged the country deep into crisis.

With Greece‘s bailout expiring on June 30 and an IMF payment falling due at the same time, Prime Minister Alexis Tsipras pleaded by phone with European officials to extend the programme until a referendum on Sunday on its future terms.

The frantic efforts to secure Greece’s place within the euro zone followed a dramatic weekend. Tsipras’s decision, early on Saturday, to put the aid package to a popular vote took the lenders and some of Tsipras’s own negotiating team by surprise.

It also pushed Greece towards defaulting on 1.6 billion euros ($1.77 billion) due to the International Monetary Fund on Tuesday.

Greeks – used to lengthy talks with creditors before an eleventh-hour deal – were left shocked by the turn of events. Lines snaked outside ATMs and inside supermarkets while fears of disruptions to petrol and medicine supplies grew.

The breakdown has pushed the European Union and euro zone into uncharted terrain. Financial markets reacted badly on Monday, with European bank shares down sharply on worries of contagion within the financial system.

“I can’t believe it,” said Athens resident Evgenia Gekou, 50, on her way to work. “I keep thinking we will wake up tomorrow and everything will be OK. I’m trying hard not to worry.”

After months of talks, Greece’s exasperated European partners have put the blame for the crisis squarely on Tsipras for rejecting a package they consider generous. The Greek side says further austerity would simply deepen one of the worst economic crises of modern times in a country where a quarter of the workforce is already unemployed.

Emotions were unusually raw among Europe’s leaders. EU Commission President Jean-Claude Juncker said he felt personally betrayed and told Greeks a “no” vote would point to a euro exit.

“I will say to the Greeks who I love deeply: you mustn’t commit suicide because you are afraid of death,” he told a news conference.

French President Francois Hollande appealed to Tsipras to return to the negotiating table and German Chancellor Angela Merkel said she was willing to talk to the Greek leader if he wanted.

The Greek government will keep banks shut at least until after July 5, the date of the referendum, and withdrawals from automated teller machines were limited to 60 euros a day when they reopened at midday. The stock exchange will also stay shut.

The creditors wanted Greece to cut pensions and raise taxes in ways that Tsipras has long argued would be counter-productive.

As Tsipras announced the closure of banks and the stock exchange late on Sunday, there were long queues outside ATMs and petrol stations as people raced to take out cash before it was too late. Lines formed at ATMs when they reopened on Monday.

“I’ve got five euros in my pocket, I thought I would try my luck here for some money. The queues in my neighbourhood were too long yesterday,” said plumber Yannis Kalaizakis, 58, outside an empty cash machine in central Athens on Monday.

As rumours flew, dozens of pensioners queued outside at least two offices of the National Bank of Greece (NBGr.AT) on Monday after hearing they could withdraw pensions from some branches. They were turned away, Reuters photographers said.

“I’ve worked all my life, only to wake up one morning to a disaster like this,” said one shop owner, who was there to collect his wife’s pension.

Despite the financial shock, parts of daily life went on as normal, with shops, pharmacies and supermarkets in the city opening and Greeks meeting to discuss their country’s fate at cafes and restaurants. Tourists gathered as usual to watch the changing of the presidential guard outside parliament.

A rally called by Tsipras’s Syriza party to protest against austerity measures and urge voters to say “No” in the referendum on bailout terms is expected later on Monday.

The referendum poses a simple question: “Should the proposal which was submitted by the European Commission, the European Central Bank and the International Monetary Fund at the Eurogroup of June 25, 2015 which consists of two parts that together consist of their comprehensive proposal be accepted?

The “No” box appears as the first option on top of the “Yes” box below. The government has urged Greeks to vote “no”, which it says will strengthen its hand at the negotiating table though analysts say that it will instead push Greece out of the euro.

The Economist Intelligence Unit predicted a no vote was more likely, raising the odds of a “Grexit to 60 percent.