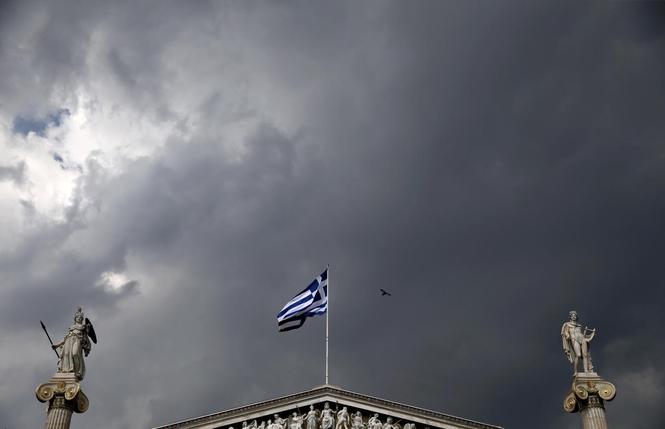 A Greek national flag flutters next to statues of ancient Goddess Athena (L) and God Apollo atop the Athens Academy June 10, 2015. Reuters/Alkis Konstantinidis

(SOURCE)  Germany’s EU commissioner said on Monday it was time to prepare for a “state of emergency” after talks collapsed at the weekend to rescue Greece from default and ejection from the euro.

Prime Minister Alexis Tsipras ignored a litany of pleas from European leaders to act fast and instead blamed creditors for the collapse in aid-for-austerity talks, the biggest setback yet in long-running talks to secure more aid for Greece.

Athens now has just two weeks to find a way out of the impasse before it faces a 1.6 billion euro bill due to the International Monetary Fund, potentially leaving it out of cash, unable to borrow and cast out of the single currency.

While there was little sign of open panic in Athens as Greeks held out hope for a last-minute solution – a familiar theme over the past six years as Athens lurched from one crisis to the next – the latest impasse triggered a selloff in European and Asian shares and weighed on the euro.

“We should work out an emergency plan because Greece would fall into a state of emergency,” Germany’s EU commissioner Guenther Oettinger said. “Energy supplies, pay for police officials, medical supplies, and pharmaceutical products and much more” needed to be ensured.

But in Athens, Tsipras – the 40-year-old novice radical leftist leader elected on a pledge to end austerity – betrayed few signs of alarm.

Ignoring warnings from European policymakers that it was up to Athens to act now, Tsipras coolly said he was happy to wait it out till the lenders changed their minds.

“We will await patiently until the institutions accede to realism,” Tsipras said in a statement to Greek newspaper Efimerida ton Syntakton. “We do not have the right to bury European democracy at the place where it was born.”

He blamed “political expediency” on the part of lenders and their insistence on new cuts in pensions “after five years of looting under the bailouts” for the latest impasse.