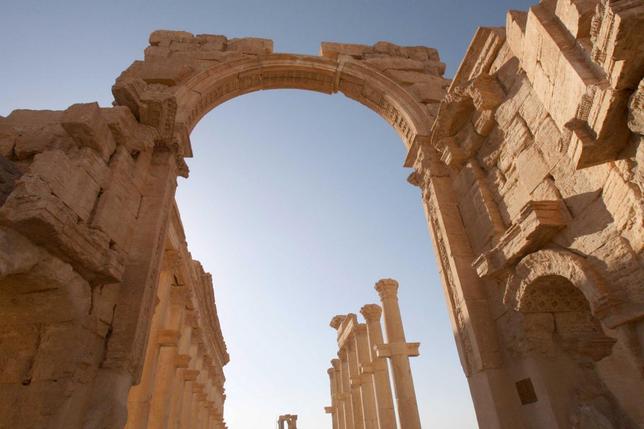 Ruins are pictured in the historical city of Palmyra, May 13, 2010. REUTERS/Mohamed Azakir

It was not immediately possible to verify the account, but it was consistent with reports by activists that the Islamist fighters had carried out executions since capturing the city from government troops.

The militants seized the city of 50,000 people, site of some of the world’s most extensive and best preserved ancient Roman ruins, on Wednesday, days after also capturing the city of Ramadi in neighboring Iraq.

The two near simultaneous victories were Islamic State’s biggest successes since a U.S.-led coalition began an air war against the fighters last year, and have forced an examination of whether the strategy is working.

The Sunni Muslim militants have proclaimed a caliphate to rule over all Muslims from territory they hold in both Syria and Iraq. They have a history of carrying out mass killings in towns and cities they capture, and of destroying ancient monuments which they consider evidence of paganism.

“The terrorists have killed more than 400 people.. and mutilated their bodies, under the pretext that they cooperated with the government and did not follow orders,” Syria’s state news agency said, citing residents inside the city.

It added that dozens of those killed were state employees, including the head of nursing department at the hospital and all her family members.

Islamic State supporters have posted videos on the Internet they say show fighters going room to room in government buildings searching for government troops and pulling down pictures of President Bashar al-Assad and his father.

Activists have said on social media that hundreds of bodies, believed to be government loyalists, were in the streets.

The Syrian Observatory for Human Rights, which monitors violence in the country with a network of sources on the ground, says that some people were beheaded in the town since it fell but has not given an estimate for the toll among civilians.

It says at least 300 soldiers were killed in the days of fighting before the city was captured.

“A bigger number of troops have disappeared and it is not clear where they are,” Rami Abdulrahman from the Observatory told Reuters.

Islamic State is the most powerful of countless mainly Sunni Muslim groups fighting against the government of President Assad, a member of the Shi’ite-derived Alawite sect. The four-year-old civil war has killed a quarter of a million people and driven nearly 8 million from their homes.

Western countries and their Arab allies are bombing Islamic State but supporting other anti-Assad forces elsewhere in the country, where government troops have lost territory in recent months.

Dozens of Syrian troops evacuated a strategically-located position inside a hospital in Idlib province in the northwest of the country last week, where they had held out since April under siege.

Syrian state television said on Sunday its air force had killed 300 insurgents in strikes that broke the siege of the Jisr al-Shughour hospital. The al Qaeda-linked Nusra Front, an insurgent group involved in the offensive in the area, said the government forces had fled.

State television aired footage on Sunday showing wounded soldiers arriving at another hospital in the nearby coastal area, stronghold of Assad’s supporters.

The Observatory said at least 261 soldiers including 90 officers had been killed in the past month. The toll includes the head of special forces, General Muheiddeine Mansour.

Assad has lost large parts of Idlib province to insurgents since late March, when the provincial capital fell. Assad had himself publicly addressed the situation at Jisr al-Shughour hospital this month, saying the army would reinforce the besieged troops there he described as heroes.