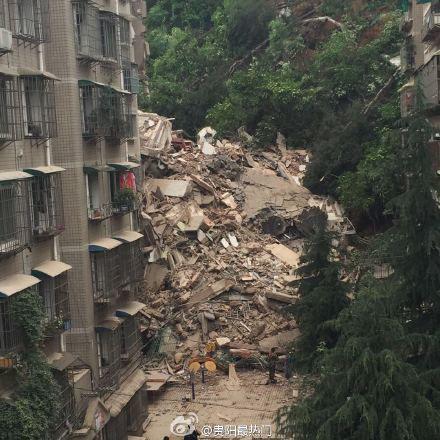 (SOURCE)  As many as 21 people are believed missing after a nine-story residential building collapsed in Guiyang, China, on Wednesday morning, according to media reports. The Associated Press reported 16 people missing, while China’s Xinhua news agency said 21 people were missing. Nearly 98 residents of the building were accounted for, according to the AP. No casualties were reported in the collapse.

Chinese rescuers used signals from cell phones to determine that some of the missing were in the rubble that formed after a landslide caused the collapse, the AP said. Guiyang is the capital of Guizhou province and is located in southwest China. There were heavy rains in the area before the landslide, according to the news wire service, which quoted a Chinese government statement.

A resident of the building, who only gave his last name, Zhang, said he woke up from loud noises and was about to run out of the structure but debris fell on him. Rescuers were able to free him from the rubble.

Another tenant said her daughter-in-law was among the missing. “She lived on the ninth floor,” she said to Xinhua, according to the New Indian Express. “I called, but couldn’t reach her.”

About 35 households live in the nine-story building, the AP reported. Xinhua said about 75 percent of the households were checked and that 21 of the 114 people who live there were still missing as of late Wednesday morning. Chinese authorities also evacuated about 100 people who lived in nearby buildings.

Landslides are a common occurrence in southern China and are usually caused by heavy rainfall or earthquakes, according to Agence France-Presse, which noted that the country has also experienced buildings collapses that were attributed to poorly constructed structures.

1 thought on “China Building Collapse: Up To 21 People Missing After Landslide In Guiyang”