In this Saturday, May 9, 2015 photo provided by Brian Khoury, a tornado touches down in Cisco, Texas. One person was killed Saturday night and another left in critical condition after the tornado hit Cisco, a rural farming and ranch area about 100 miles west of Fort Worth. (Brian Khoury via AP) 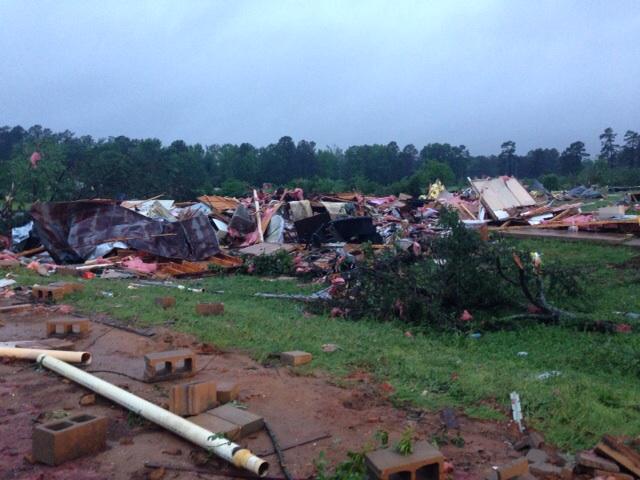 Howard County Sheriff Brian McJunkins said two victims who lived in adjoining mobile homes in Nashville, Arkansas, died after several tornadoes were reported in the area late Sunday. McJunkins told KLSA-TV that two other people in the town about 50 miles north of Texarkana were critically injured.

In neighboring Texas, a likely tornado pummeled the small city of Van in Van Zandt County around 8:45 p.m. Chuck Allen, the Van Zandt County fire marshal and emergency management coordinator, said about 30 percent of the city was damaged in the storm.

Allen said in an email early Monday that a triage area was established at a church and about 26 residents were taken to hospitals. The extent of their injuries was not immediately clear.

Allen said authorities were going door to door in the city about 70 miles southeast of Dallas, hunting for injured people. Van has about 2,500 residents.

Damage from a possible tornado is seen in Lewisville, Texas, on the morning of Sunday, May 10, 2015.  (Twitter/LewisvilleEMA)

Utility companies are working to restore “vital infrastructures,” and road and bridge crews are working to open streets and highways to allow for first responder access, he said.

The Van Independent School District said on its website schools would be closed Monday.

The storm was part of severe weather that stretched across North Texas on Sunday. 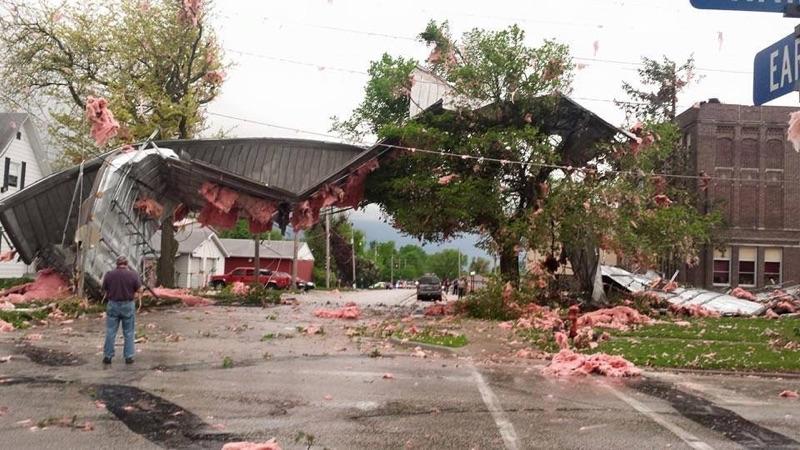 Further north, in Lake City, Iowa, a suspected tornado tore the roof from a high school as about 150 students, family and faculty attended a baccalaureate and senior awards ceremony inside Sunday night.

South Central Calhoun girls’ basketball coach Dave Birks said they were able to evacuate to the school’s basement and locker room area about two minutes before the twister hit.

“The lights went off, and everyone’s ears kind of popped,” Birks said, adding that school windows were blown out and insulation was scattered nearby. He also said the high jump pit from the school’s outdoor athletic complex was missing and hurdles were scattered everywhere.

Damage as seen in Delmont, South Dakota, after a large tornado hit the town on Sunday, May 10, 2015.  (Photo Credit: Twitter/@Jody_Rae8)

“Our house is flat. There is nothing left,” said Stephanie Lunder, 34, who was sheltering with her husband and four children in the basement when the storm hit. State Department of Public Safety spokeswoman Kristi Turman said the town’s 200-plus residents were asked to leave for safety reasons.

Also early Sunday, another likely tornado ripped roofs off buildings and damaged trees near Denton, about 40 miles northwest of Dallas, according to weather service meteorologist Tom Bradshaw. There were no immediate reports of injuries or fatalities.

The area also experienced torrential rains that led to widespread flash flooding. Authorities in Denton County said Sunday that two groups of people had to be airlifted by helicopters to safety.