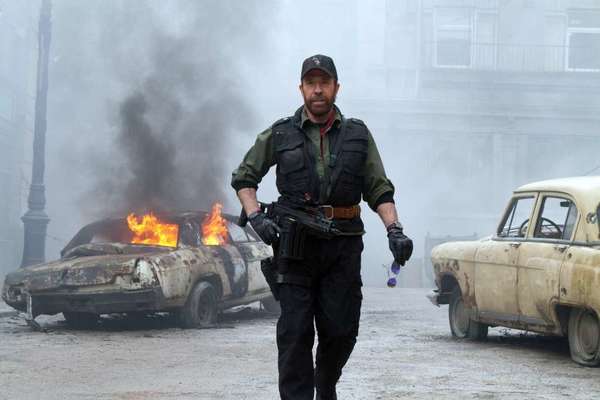 The upcoming military exercise Jade Helm 15, being held on U.S. soil, has already brought concern from conspiracy theorists, one governor and private citizens — and Norris has joined the action.

The “Walker, Texas Ranger” star penned an op-ed for World Net Daily in which he expressed concerns that the operation could turn into an all out occupation of Texas.

Not too surprising since the map for the event listed Utah, California and Texas as “hostile” territory.

“If you haven’t heard about Jade Helm 15, you need to,” Norris wrote. “It is multi-state training mission for special operations soldiers scheduled over an eight-week period in July and August, with most of the activity happening on private property but some public, too. The official website press release from March 24 admits: ‘While multi-state training exercises such as these are not unique to the military, the size and scope of Jade Helm sets this one apart.’”

It is that “size and scope” that make Jade Helm a first of its kind.

The Defense Department described the operation as follows:

“Gov. Abbot was right in writing Maj. Gen. Gerald Betty, ‘During the training operation, it is important that Texans know their safety, constitutional rights, private property rights and civil liberties will not be infringed.’” Norris wrote.

“I’m glad Texas Sen. Ted Cruz is asking the tough questions of the Pentagon about Jade Helm 15, particularly because its “exercises” come too near to my ranch’s backdoor,” he added.

Norris offered a better idea for all of the military personnel assembling in the Southwest.

“If the government insists on running expanded military ops across seven Southwest states, why doesn’t it move all that ‘military training’ south and protect our borders at the same time?” he asked.

Norris said Americans would be foolish to blindly trust the government’s word that the operation is merely an exercise.

“We must never check our brains or blindly trust, especially the government,” he said. “Rather, we must fight until our dying breaths for liberty, especially when it appears those in power are trying to knock down Old Glory.”

On Monday Pentagon spokesman, Col. Steve Warren told CNN the public has nothing to worry about.

“Jade Helm is a long planned and coordinated exercise,” Warren said. “We are not taking over anything.”

4 thoughts on “Not in His Backyard! Chuck Norris Challenges Government ‘Occupation’ of Texas”