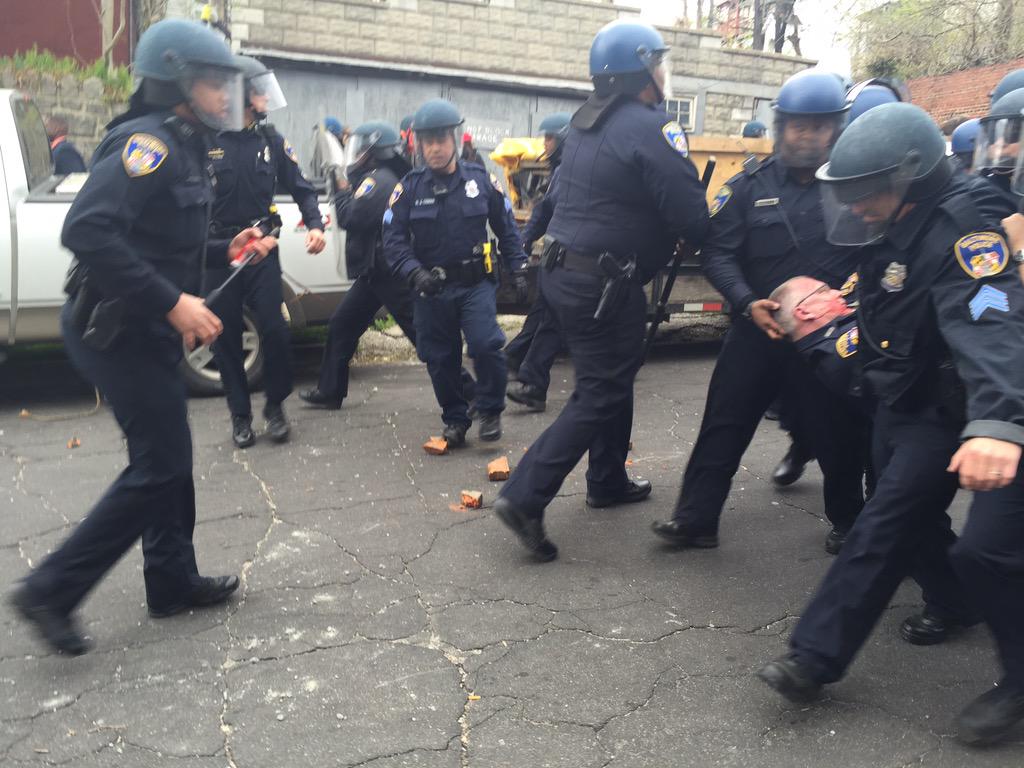 BALTIMORE (Reuters) – Seven Baltimore police officers were injured on Monday as rioters threw bricks, broke windows, looted businesses and burned patrol cars in violent protests following the funeral of a black man who died after he was injured in police custody.

The riots broke out just a few blocks from the site of the funeral of 25-year-old Freddie Gray in northwest Baltimore and then spread through other parts of the city in the most violent demonstrations since looting in Ferguson, Missouri, last year.

Television images showed mobs of rioters jumping on top of a police car, destroying a taxi and setting two other patrol cars on fire after teenaged crowds ignored calls to disperse and clashed with lines of hundreds of police. Gangs had threatened to target police officers, local law enforcement said.

Gray’s death on April 19 reignited a public outcry over police treatment of African Americans that flared last year after the killings of unarmed black men in Ferguson, New York City and elsewhere.

Schools, businesses and train stations closed in Baltimore, a city of 662,000 people 40 miles (64 km) from the nation’s capital.

A string of deadly confrontations between mostly white police and black men, and the violence it has prompted, will be among the challenges facing U.S. Attorney General Loretta Lynch, who was sworn in on Monday. CNN reported that Lynch was discussing Baltimore at the White House.

Following her swearing in, Lynch signaled that improving relations between police and the communities they protect will be high on her agenda.

“We can restore trust and faith both in our laws and in those of us who enforce them,” she said.

Police initially showed restraint on Monday, but then began arresting people and prepared to use teargas and pepper spray.

“It is disappointing just a few hours after putting Gray to rest,” Reverend Jamal Bryant who spoke at the funeral told reporters. “This is not what the family asked for today of all days. This was a day of sacred closure.”Gray’s family, pastors and city officials had pleaded for peaceful demonstrations.

Baltimore Police Captain Eric Kowalczyk said at a briefing that one of the injured police officers was unresponsive and several had broken bones.

Earlier, police urged officers to take steps to ensure their safety after they reported receiving a “credible threat” that several gangs were planning to try to “take out” law enforcement officers.

The largely black city has long struggled with high crime and gangs, a reputation that has made it the setting for gritty television police dramas such as “The Wire.” Last year officials adopted one of the strictest youth curfews in the United States in an effort to tackle its crime problems.

At the funeral, speaker after speaker before the crowd packing the 2,500-seat New Shiloh Baptist Church said the world was watching to see if justice would be done for Gray.

Before the service, Gray’s body, clad in a white shirt, black tie and dark pants, lay in an open white coffin in front of the altar as mourners passed by. The coffin was closed during the service.

Gray was arrested on April 12 when he fled from police in a high-crime area. He was carrying a switchblade knife, and he was put inside a transport van to be taken to a police station.

At some point, Gray suffered the spinal injury that led to his death a week later. City Police Commissioner Anthony Batts said on Friday that officers failed to belt him into his seat securely and to give him timely medical attention.

Police have said they would conclude their investigation by Friday and forward the results to state prosecutors. Six officers have been suspended, and the U.S. Justice Department is investigating the incident for possible civil rights violations.