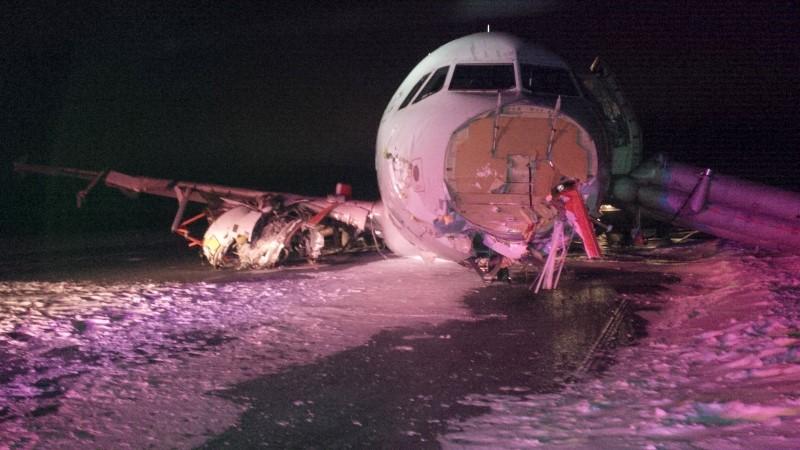 Sunday, March 29, 2015 An Air Canada Airbus A320 lies in the snow after it skidded off the runway at Halifax International Airport, Nova Scotia March 29, 2015, in this handout courtesy of the Transportation Safety Board of Canada. The Air Canada Flight 624 crash-landed in the east coast city of Halifax and went off the runway early on Sunday, local media reported, with the airline confirming 23 passengers and crew suffered non-life threatening injuries. Reuters

(Reuters) – An Air Canada (AC.TO) flight crash landed and slid off the runway in the east coast city of Halifax on Sunday, with the airline confirming 23 passengers and crew suffered non-life threatening injuries.

The airline said the incident happened shortly after midnight, and 18 of the 23 admitted to hospitals for observation and treatment of minor injuries had been released.

Air Canada said the Airbus A320 flying from Toronto was carrying 133 passengers and five crew members. The airline did not give the cause of the accident but said it was cooperating fully with investigators.

It was snowing heavily at the airport at the time of the accident. Passengers interviewed by local media described a “big flash” before landing and speculated the flight may have struck a power line, but this was not confirmed by the authorities.

Peter Spurway, a spokesman for the Halifax Stanfield International Airport, told local media that two people from the plane required “urgent care”. He also confirmed power was out at the airport around the time of the crash but did not give the cause. Power has since been restored.

Photos posted online by the Transportation Safety Board of Canada showed the nose of the airline broken off and one wing badly damaged. (here)

The federal agency said it was deploying a team to investigate the crash.