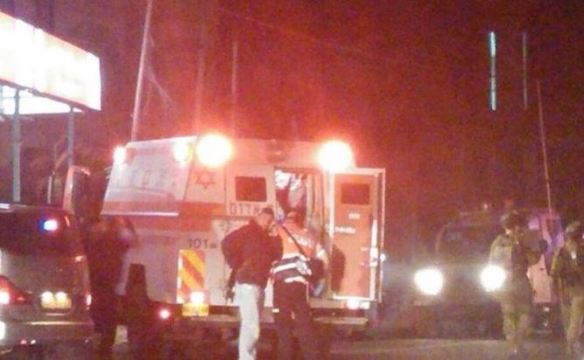 Emergency team at the scene of a hit and run at Gush Etzion junction.. (photo credit:HAR HEVRON SPOKESMAN)

(SOURCE)  Three IDF soldiers were injured Wednesday night after a Palestinian vehicle slammed into them on Route 60 southwest of Bethlehem in an attempt to target the Israeli forces, the IDF spokesperson’s office said.

A freight truck with Palestinian license plates hit the three IDF soldiers, wounding one seriously and two moderately in what the IDF said was a terror attack, making it the second such vehicular attack targeting Israelis on Wednesday.

The perpetrating vehicle fled the scene immediately after the attack, and security forces set up roadblocks and launched searches of the area of the southern West Bank.

The soldiers were apparently near a military position when they were attacked.

MDA paramedic Eyal Zahavi, who treated the wounded, said he saw 20-year-olds lying on the side of the road, and that all were fully conscious. One suffered chest injuries and limb wounds, and was classed as being seriously injured. Two others suffered upper and lower limb injuries.

Treatment included “inserting a needle to drain air out of the chest of the seriously injured man, and we urgently evacuated them to hospital,” Zahavi said.

Security forces were fanning out in an attempt to locate the driver. The IDF is also investigating the incident and taking part in the widespread searches.

Earlier Wednesday, a Hamas-linked Palestinian motorist slammed into pedestrians near the Jerusalem light rail, killing one Border Police officer and wounding 14 others.