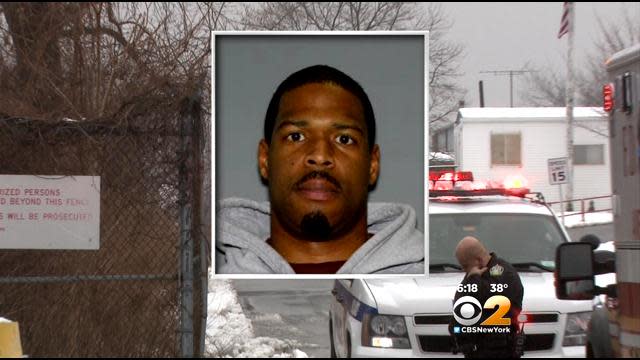 NEW YORK (AP) — In the quiet of a pre-dawn Saturday on a dead-end street, a father came home and shot his family in their heads, leaving women in three generations dead and a wounded 12-year-old girl calling 911, police said.

“What I did, I cannot come back from,” Jonathon Walker told his brother by phone soon afterward, police said. And Walker did not come back — police said he killed himself in his car on a desolate street a few miles away, ending a burst of violence that stunned relatives who said the family hadn’t shown signs of trouble.

The 34-year-old security guard had killed his 7-year-old daughter, Kayla Walker; his 31-year-old girlfriend, Shantai Hale; and Hale’s mother, Viola Warren, 62. His and Hale’s older daughter, whom a relative identified as Christina Walker, was hospitalized in stable condition, police said.

Investigators were trying to trace Walker’s movements before the shooting as relatives struggled to comprehend shootings that struck them as inexplicable.

While Chief of Detectives Robert Boyce said police had taken reports for domestic incidents at the home in 2005 and 2006 for “nominal matters” and Walker had been arrested twice in now-sealed cases, relatives said they weren’t aware of any family strife or concerns about Walker.

Police gather near a home located at 231-11 148th Avenue, left, Saturday, Jan. 24, 2015, in the Queens borough of New York. Police say a father shot his daughters, his girlfriend and her mother in their home and then killed himself after the shooting that left three generations of women dead and a 12-year-old critically injured. New York Police Department spokesman Steve Davis says Jonathon Walker’s body was found in a car, with a gun inside, in an isolated part of Queens after Saturday’s pre-dawn shootings. (AP Photo/Frank Franklin II)

“There was no indication of anything that would remotely make him do this,” Wendell Warren, Viola Warren’s brother, said as he wiped tears from his eyes outside the home on a suburban-style street in Queens, near a park and John F. Kennedy International Airport. Warren had fixed a broken boiler at the home just last week.

“We’ll be baffled for years,” he said.

Doreen Warren said Walker had joined in a pleasant family gathering at Christmas and her daughter and granddaughter never complained to her about him. She said she had spoken to Viola Warren, who worked at the airport, just two days ago.

“Nobody even dreamed of anything like this,” added Silford Warren, another of Viola Warren’s brothers.

The bloody scene unfolded suddenly and quickly — Walker showed up to the home at 5:38 a.m., and his 12-year-old daughter called 911 a few minutes afterward to report that her father had shot the family, Boyce said. When officers arrived three minutes later, Walker was gone.

This undated photo provided by the New York City Police Department shows Jonathon Walker. Police said they were seeking Walker, 34, as the suspect in the predawn shootings, which left a 7-year-old dead, a 12-year-old critically injured, and their 31-year-old mother and 62-year-old grandmother dead on a suburban-style street by a park in Queens, near John F. Kennedy International Airport. (AP Photo/New York City Police Department)

They searched for his SUV and found it within hours, with Walker’s body and a .45-caliber gun inside, Boyce said.

The victims were found on the home’s floor, he said.

As police sought Walker, Doreen Walker woke up at her home elsewhere in New York City. She turned on the TV to hear violent news, and then had the shock of realizing it concerned her own family.

“You see these things on television,” she said, “and you never know when they’re going to hit home.”