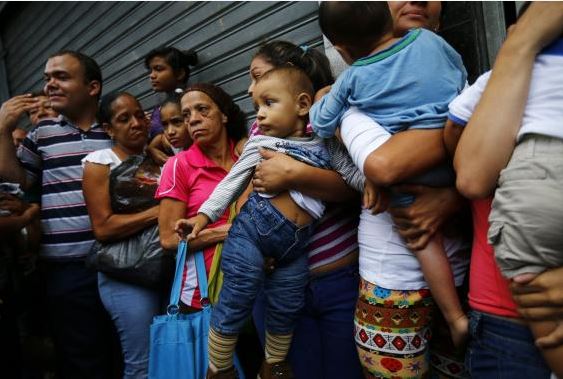 People line up to buy toilet paper and baby diapers at a supermarket in downtown Caracas January 19, 2015. REUTERS/Jorge Silva

The job usually involves starting before dawn, enduring long hours under the Caribbean sun, dodging or bribing police, and then selling a coveted spot at the front of huge shopping lines.

As Venezuela’s ailing economy spawns unprecedented shortages of basic goods, panic-buying and a rush to snap up subsidized food, demand is high and the pay is reasonable.

“It’s boring but not a bad way to make a living,” said a 23-year-old man, who only gave his first name Luis, as he held a spot near the front of a line of hundreds outside a state supermarket just after sunrise in Caracas.

Unemployed until he tried his new career late last year, Luis earns about 600 bolivars, a whopping $95 at Venezuela’s lowest official exchange rate but just $3.50 on the black market, for a spot. He can do that two or three times a day.

“There’s a lady coming at 8 a.m for this place. She’s paid in advance,” Luis said, patting his wallet despite nods of disapproval around him. “I’ll have a break and then maybe start again. I chat to people to pass the time, the conversation can be fun. If it’s not, I play on my phone.”

The phenomenon began about two years ago but accelerated suddenly this month as a Christmas and New Year distribution slowdown exacerbated existing shortages of basics from milk and meat to toilet paper and diapers.

Foes of President Nicolas Maduro, and his predecessor Hugo Chavez who ruled from 1999-2013, say the lines symbolize the economic incompetence and inevitable scarcities of socialism.

Nationalizations have crimped private production while imports have fallen due to restrictive currency controls.

The government says panic-buying driven by unfounded rumors of chaos, price-gouging and hoarding by unscrupulous store owners, and media exaggeration of shortages, are behind chaotic scenes at supermarkets and pharmacies around the nation.

“If there was no food, you wouldn’t be seeing lines!” said Carlos Osorio, the vice-president for food, adding that in 15 years of socialism per capita annual meat consumption rose from 11 to 26 kg.

That statistic is no consolation for Alcira Garcia, a retired 60-year-old from the poor Caracas suburb of Macarao, who rose at 4 a.m. to stand in line at a downtown state supermarket to find cheap food for her household of five.

Despite her efforts, she left sweating and harried at 11 a.m. – without red meat. “But I did get chicken, rice, oil and toilet paper, so it was worth it!” she said before starting the slog home with her bags.

Chicken that day was selling in the state-run Bicentenario supermarket for 43 bolivars per kg – four times cheaper than in private stores and a prime illustration of why so many Venezuelans are prepared to wait hours in line for bargains.

Subsidized food and other basic products have made a huge difference in Venezuelans’ lives and long been a mainstay of the government’s support among the poor. Maduro’s challenge is to maintain such welfare generosity in an economy already in recession even before a recent crash in oil revenues.

The shortages have already weighed heavily on his popularity, at its lowest point of 22 percent according to one prominent local pollster, and augur badly for the ruling Socialist Party in legislative elections later this year.

Bearing out a constant government complaint, some people leaving supermarkets on a recent morning with far more products than one family could need acknowledged they were for re-sale. Many goods turn up at twice the price in the huge Petare slum.

The local Datanalisis pollster estimated that 65 percent of pharmacy customers could be re-selling, while the average consumer spends eight hours a week shopping.

There have been scores of arrests of people hawking goods across Venezuela’s borders with Colombia and Brazil, where they are sold for a large mark-up.

“What else am I supposed to do? If I can’t feed my family working honestly, then I’m forced to try other things,” said a Colombian immigrant who gave his name but asked for it not be published, just out of jail where he spent a month after police caught him smuggling across the border.

There is a heavy police presence at many shops and increasing restrictions on sales, with some people receiving stamps on their arms or only allowed to shop on a certain day depending on the number of their ID card.

Some families send elderly relatives to hold spots for them, while others take babies and use them as an excuse to jump to the front.

Other services have quickly sprung up outside stores, from chair-renters to bag-sellers and juice-makers. An opposition columnist has started an interactive map showing locations and photos of the worst lines around Venezuela.

“I’ve had enough,” said housewife Saray Linares, 27, who is pregnant with her fourth child and was outraged at being pushed during a crush at a supermarket counter. “It’s horrible, savage, people running everywhere.”

State TV has begun a campaign urging Venezuelans to show confidence in their country and reduce the panic-buying. Maduro said at the weekend that in just four days last week, 18 million people – out of a population of 30 million – had been supermarket shopping, three times more than normal.