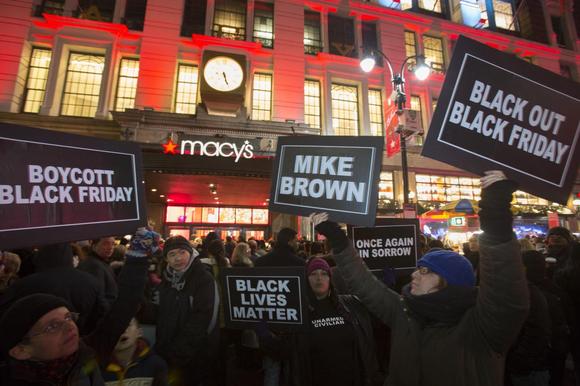 Protesters hold signs aloft outside Macy’s before the kick off of Black Friday sales in New York November 27, 2014. REUTERS/Andrew Kelly

(Reuters) – Protesters in Ferguson, Missouri began targeting Black Friday sales at major retailers overnight in a new tactic to vent their anger at a grand jury decision not to indict a white police officer who fatally shot an unarmed black teen.

Kicking off their latest strategy inside a Walmart in another nearby suburb of St. Louis, about 75 demonstrators protested peacefully, chanting “Hands up, don’t shoot!”, bemusing bargain-hunters pushing their brimming shopping carts.

They dispersed peacefully when ordered by a small group of police, moving on to a Target store where they staged a similar demonstration. More protests were planned for Friday.