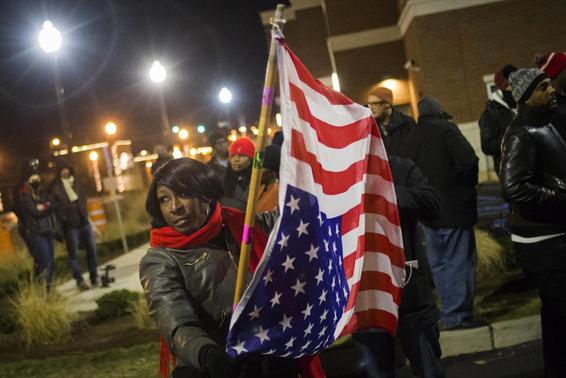 A protester, who was among dozens demanding the criminal indictment of a white police officer who shot dead an unarmed black teenager in August, holds a U.S. flag outside the Ferguson Police Station in Missouri November 20, 2014. REUTERS/Adrees Latif

(Reuters) – Riot police arrested at least two demonstrators in Ferguson, Missouri, for a second night running as tensions simmer ahead of a grand jury decision in the case of a white officer who shot dead an unarmed black teenager in August.

The grand jury is deciding whether to charge officer Darren Wilson in the slaying of 18-year-old Michael Brown in the St. Louis suburb in a case that has exposed fresh strains in often-troubled race relations in the United States.

About a dozen protesters gathered again outside the police station in Ferguson in frigid conditions, sometimes blocking vehicles as they waved placards and chanted “Whose streets? Our streets!” and “Killer cops have got to go!”

Officers in helmets and shields were deployed after a commander told protesters not to block traffic. Brief scuffles broke out and at least one woman and a man were handcuffed and taken away.

The grand jury could continue meeting into January but a decision on the Brown case is expected by the end of November.

The Aug. 9 killing of Brown triggered weeks of sometimes violent protests demanding Wilson be indicted. Businesses and schools in Ferguson are bracing for renewed unrest, especially if the grand jury decides not to bring charges against Wilson.