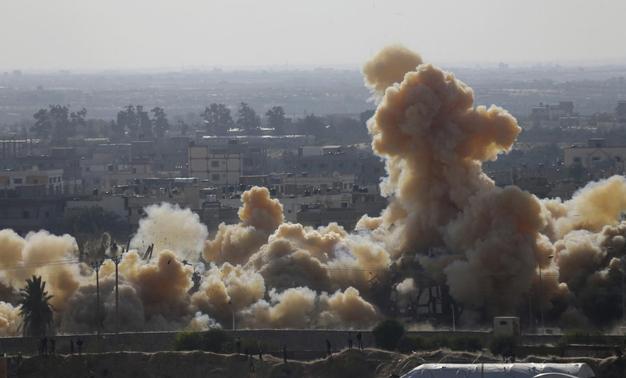 Smoke rises as a house is blown up during a military operation by Egyptian security forces in the Egyptian city of Rafah, near the border with southern Gaza Strip November 3, 2014. REUTERS/Ibraheem Abu Mustafa

(Reuters) – Egypt has indefinitely shut schools in two border towns in northern Sinai as the army prepares to intensify a battle with Islamist militants that turned the daily trip to lessons into a “journey of death”.

Local people say children’s education has fallen victim while the military stages air strikes against jihadists, who are targeting soldiers and police, and have started beheading army informers.

“We are putting our lives at risk on a daily basis,” said Mohamed, a teacher who lives in the town of Sheikh Zuweid. “Sometimes there is fire between gunmen and the armed forces and sometimes stray bullets hit some of us.”

Militancy has surged in the Sinai Peninsula, which borders Israel, Gaza and the Suez Canal, since the army ousted an elected Islamist president last summer. At least 33 security personnel were killed last month and one Sinai-based group has pledged its loyalty to Islamic State, which has overrun large areas of Syria and Iraq.

Army checkpoints dot the main roads in northern Sinai which residents fear is turning into an all-out war zone. This made the daily school run arduous, and dangerous if militants targeted the troops manning them. “We’ve started calling the trip to and from school the journey of death,” said another teacher, declining to be named.

Since the militant attacks on Oct. 24, Egypt has imposed emergency rule in parts of Sinai, evicted hundreds of families and demolished their homes to create a buffer zone along the Gaza border about 350 km (220 miles) northeast of Cairo.

The government hopes that by clearing the 1 km-deep area of residents, buildings and trees, it can stem the flow of arms via tunnels from Gaza to the Sinai-based jihadists.

“The buffer zone is a principal part of the solution,” President Abdel Fattah al-Sisi said in an interview with France 24 television on Thursday. “This should have been done years ago … There was an understanding with the residents about the need for Egypt’s security.”

Not everyone agrees with him, and the heavy-handed approach is breeding resentment among local residents who have long complained of neglect by Cairo.