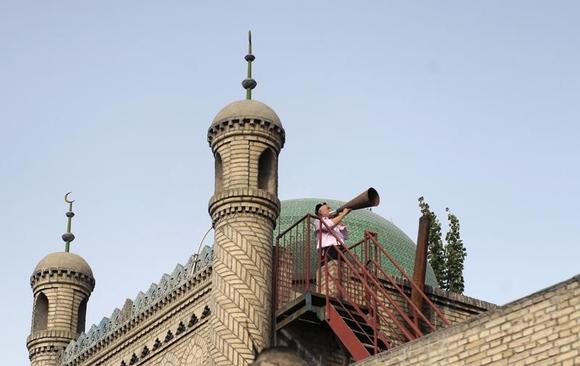 An Imam calls on Muslim Uighurs for their afternoon prayer with a home-made iron loudspeaker on the roof of the Kuqa Mosque, the second biggest mosque in Xinjiang Uighur Autonomous Region, August 20, 2012. REUTERS/Stringer

(Reuters) – China has jailed almost two dozen people including “wild imams” who preach illegally in the western region of Xinjiang where the government says Islamists are waging a violent campaign for a separate state, Chinese media reported on Tuesday.

The 22 suspects were sentenced to prison terms ranging from five to 16 years at a mass public sentencing in Xinjiang on Monday, the state-controlled China News Service reported.

Others were accused of inciting ethnic hatred, using superstition to destroy the law, and picking quarrels and provoking trouble, it said.

Xinjiang is home to a mostly Muslim minority group known as Uighurs.

China has vowed to crack down on religious extremism, which it blames for a string of violent attacks this year in Xinjiang and elsewhere. Exiles and activists say Chinese controls on the religion and culture of the Uighur people is more a cause of the violence than well-organized militant groups.