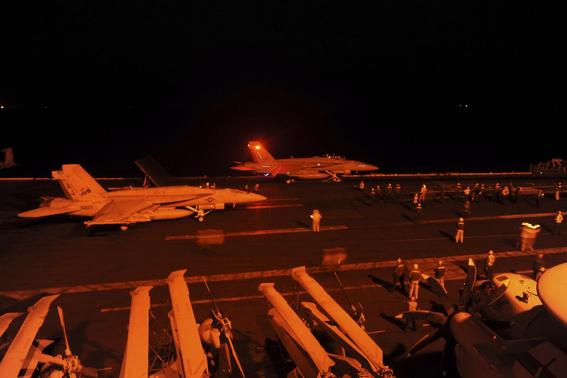 (Reuters) – The United States and Arab allies bombed Syria for the first time on Tuesday, killing dozens of Islamic State fighters and members of a separate al Qaeda-linked group, pursuing a campaign against militants into a war at the heart of the Middle East.

The Syrian Observatory for Human Rights, which monitors the war in Syria, said at least 20 Islamic State fighters were killed in strikes that hit at least 50 targets in Raqqa and Deir al-Zor provinces in Syria’s east.

It said strikes targeting the Nusra Front in the northern provinces of Aleppo and Idlib had killed at least 50 fighters and eight civilians. The Nusra Front is al Qaeda’s official Syrian wing and Islamic State’s rival. The Observatory said most of the fighters killed there were not Syrians.

The air attacks fulfill President Barack Obama’s pledge to strike in Syria against Islamic State, a Sunni Muslim group that has seized swathes of Syria and Iraq, imposing a mediaeval interpretation of Islam, slaughtering prisoners and ordering Shi’ites and non-Muslims to convert or die.

“These attacks will be answered,” an Islamic State fighter told Reuters by Skype from Syria, blaming the “sons of Saloul” – a derogatory term for Saudi Arabia’s ruling family – for allowing the strikes to take place.

The Sunni fighters, who have proclaimed a caliphate ruling over all Muslims, shook the Middle East by sweeping through northern Iraq in June. They then alarmed the West in recent weeks by beheading two U.S. journalists and a British aid worker, raising fears that they could attack Western countries.

The strikes took place hours before Obama goes to the U.N. General Assembly in New York where he will try to rally more nations behind his drive to destroy Islamic State.

The action pitches Washington for the first time into the three-year-old Syrian civil war, which has killed 200,000 people and displaced millions.

U.S. forces have previously hit Islamic State targets in Iraq, where Washington supports the government, but had held back from a military engagement in Syria, where the United States opposes President Bashar al-Assad.

2 thoughts on “U.S., backed by Arabs, launches first strikes on fighters in Syria”