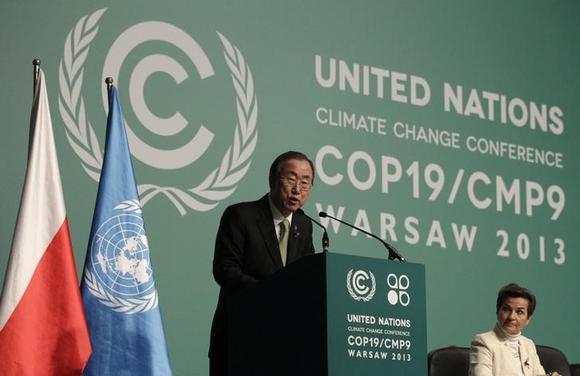 (Reuters) – World leaders including U.N. Secretary-General Ban Ki-moon were set to join farmers, fishermen, children and others in a massive demonstration on Sunday to demand action on climate change.

Organizers are expecting 100,000 to join the People’s Climate March in midtown Manhattan ahead of this week’s U.N. General Assembly, which brings together 120 world leaders to discuss reducing carbon emissions that threaten the environment.

The gathering will include celebrities such as musician Sting, scientists in lab coats, labor groups, 20 marching bands and floats powered by biodiesel vehicles or pulled by hand, said Jamie Henn, spokesman for 350.org, which organized the event with more than a dozen other environmental, labor and social justice groups.

“You can’t fight climate change sitting on your couch and holding your breath,” Henn said.

Participants from as far away as Kansas and Texas were headed to New York on 500 buses, he said.

“This is the best gallon of gasoline that anyone is going to spend. It’s a hypocrisy we have to embrace,” said Henn, who lamented a lack of more environmentally friendly electric buses.

Organizers said the massive mobilization is aimed at transforming climate change “from an environmental concern to an ‘everybody issue.'”

The United Nations on Tuesday is set to host a climate summit where world leaders will continue talks toward a pact 200 nations are working on that would rein in the rising greenhouse gas emissions. Negotiators aim to complete that deal in late 2015.

The New York rally is part of a global protest that includes events in 161 countries including Afghanistan, Bulgaria and Italy. It will starts in Central Park, where organizers will “sound the climate alarm” with churches ringing bells, synagogues blowing shofars and marchers playing drums, trumpets and vuvezelas.

The march is aimed at demanding changes that will lead to a world economy run entirely on clean energy, organizers said in a statement, noting “95 percent of Norway and Uruguay’s energy is clear so it’s possible.”

The 2-mile (3.2-km) route sanctioned by the New York Police Department winds past Times Square, where dozens of giant billboards flash even at midday and attempts at eco-friendly signs – lit by wind power – have been spotty.

Organizers bill the event as the largest gathering focused on climate change since 2009, when tens of thousands of people gathered in Copenhagen in a sometime raucous demonstration that resulted in the detention of 2,000 protesters.

(Additional reporting by Louis Charbonneau at the United Nations; Editing by Scott Malone and Bill Trott)