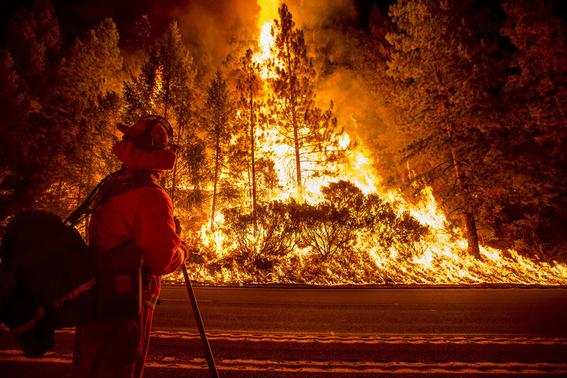 A firefighter battling the King Fire watches as a backfire burns along Highway 50 in Fresh Pond, California September 16, 2014. REUTERS-Noah Berger

(Reuters) – More residents of Northern California mountain communities were told to leave their homes on Thursday after an out-of-control wildfire doubled in size overnight, scorching more than 100 square miles of drought-parched timber and brush.

Nearly 3,700 firefighters struggled to stop the forward march of the King Fire, the largest and most dangerous of 11 major wildfires raging across California, but had managed to cut containment lines around just 5 percent of the flames as of Thursday morning, officials said.

The blaze raced across some 43,000 acres of forest land late on Wednesday and early on Thursday and has now burned more than 70,000 acres of state land in the El Dorado National Forest northeast of Sacramento.

Fire officials said that despite a break in the heat wave that has baked much of California for a week, they expected another tough day as wind gusts of up to 25 miles per hour fanned the flames.

“There is a high potential for extreme fire behavior today. Although the predicted temperatures are slightly lower and the humidity slightly higher, the winds are expected to be as strong or stronger than yesterday,” the U.S. Forest Service said on its fire-tracking website.

Prosecutors in El Dorado county charged a man with arson on Thursday in connection with the King Fire, alleging in a criminal complaint that he “willfully and maliciously” set fire to forest land in the area.

No buildings have been destroyed since the blaze erupted on Saturday, but the California Department of Forestry and Fire Protection said some 2,000 homes and 1,500 other structures were in the path of the flames and had been evacuated.

Governor Jerry Brown declared a state of emergency late on Wednesday in response to the King Fire and a blaze farther north, putting all state resources at the disposal of his Office of Emergency Services.