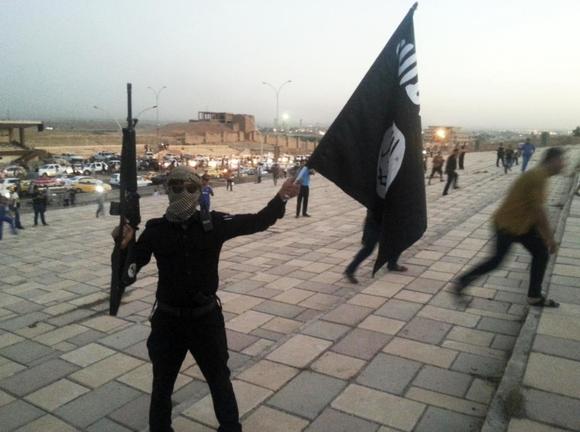 A fighter of the Islamic State of Iraq and the Levant (ISIL) holds an ISIL flag and a weapon on a street in the city of Mosul, June 23, 2014.  REUTERS/Stringer

(Reuters) – Islamic State, fighting to redraw the map of the Middle East, has been coaching Egypt’s most dangerous militant group, complicating efforts to stabilize the biggest Arab nation.

Confirmation that Islamic Sate, currently the most successful of the region’s jihadi groups, is extending its influence to Egypt will sound alarm bells in Cairo, where the authorities are already facing a security challenge from home-grown militants.

A senior commander from the Sinai-based Ansar Bayt al-Maqdis, which has killed hundreds of members of the Egyptian security forces over the last year, said Islamic State has provided instructions on how to operate more effectively.

“They teach us how to carry out operations. We communicate through the internet,” the commander, who asked to remain anonymous, told Reuters.

“They don’t give us weapons or fighters. But they teach us how to create secret cells, consisting of five people. Only one person has contact with other cells.”

Militant groups and the Egyptian state are old foes. Some of al Qaeda’s most notorious commanders, including its current leader Ayman al-Zawahri, are Egyptian.

One Egyptian president after another has crushed militant groups but they have always resurfaced.

The success of Islamic State in seizing large parts of Syria and Iraq has raised concerns in Egypt, where authorities are battling Ansar as well as militants who have capitalized on the chaos in post-Gaddafi Libya to set up over the border.

Islamic State became the first jihadi group to defeat an Arab army in a major operation after steamrolling through northern Iraq in June almost unopposed by the Iraqi military.