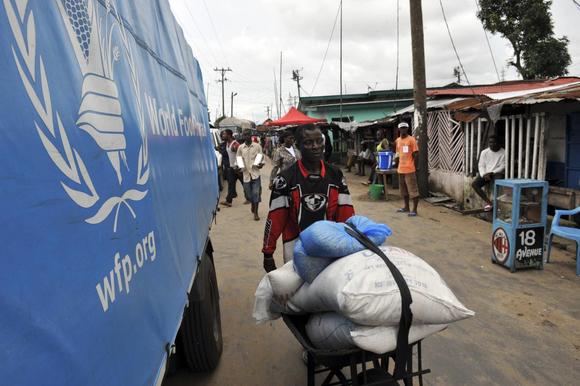 A resident of West Point neighborhood, which has been quarantined following an outbreak of Ebola, pushes a wheelbarrow full of food rations from the United Nations World Food Programme (WFP) in Monrovia August 28, 2014.  REUTERS/2Tango

(Reuters) – When a starving Ebola patient escaped from a treatment center in Monrovia and staggered through a crowded market in search of food, bystanders who scattered in his path voiced their anger not at him but at Liberia’s president.

To many in this impoverished West African country, President Ellen Johnson Sirleaf’s government has not done enough to protect them from the deadly virus. Ebola has killed more than 1,000 people in Liberia since its arrival six months ago. Across West Africa, the death toll from the world’s worst Ebola outbreak has surpassed 1,900.

Panicked residents said the patient was the fifth to escape in recent weeks from the understaffed ELWA hospital. Dozens watched anxiously as workers in protective clothes bundled the struggling patient into a truck and drove him back.

“The patients are hungry, they are starving. No food, no water,” said one terrified woman in the crowd. “The government need to do more. Let Ellen Johnson Sirleaf do more!”

A Noble Peace Prize winner for her work on women’s rights, Johnson Sirleaf had made gradual progress before the epidemic in rebuilding Liberia after a 1989-2003 civil war.

She now seems destined, however, to spend the last two years of her presidency dealing with the fallout from Ebola.

Feted internationally since she became Africa’s first female head of state nine years ago, Johnson Sirleaf’s reputation at home has been dogged by a slow improvement in living standards. Some critics saying she is out of touch with poor Liberians.

The 75-year-old former World Bank official now faces mounting anger over her handling of Ebola. Her government has been denounced for causing food shortages by imposing quarantine on affected communities, while healthcare workers have walked out on strike after several of their colleagues died.

The president has also faced criticism for sending troops to quell protests in the ocean-front West Point slum of Monrovia. A 15-year-old boy was fatally shot after soldiers opened fire on a crowd trying to break out of a quarantine there.

Opponents have called for Johnson Sirleaf to resign, but her government has said it is doing everything possible, given the scant resources at its disposal.

“Care and attention should be given to helping people who need it the most and we can get into the politics later,” Information Minister Lewis Brown told Reuters. “We’re in a better position than we were several weeks ago in this fight.”

But the disease is far outpacing efforts to control it. Medical charity Medecins Sans Frontieres (MSF) said this week a further 800 Ebola beds were needed in Monrovia alone, and it called for foreign military teams to be deployed.