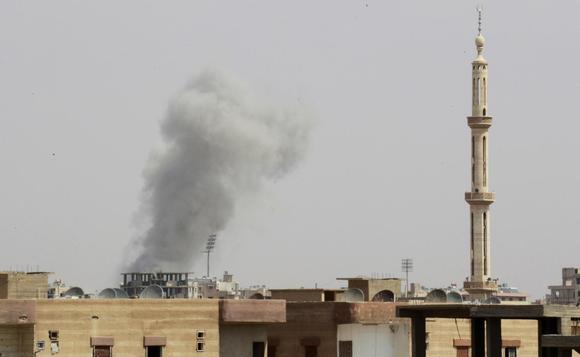 Smoke rises after what activists said was an air raid by Syrian government forces at the eastern Syrian city of Raqqa August 18, 2014. REUTERS/Stringer

(Reuters) – In the cities and towns across the desert plains of northeast Syria, the ultra-hardline al Qaeda offshoot Islamic State has insinuated itself into nearly every aspect of daily life.

The group famous for its beheadings, crucifixions and mass executions provides electricity and water, pays salaries, controls traffic, and runs nearly everything from bakeries and banks to schools, courts and mosques.

While its merciless battlefield tactics and its imposition of its austere vision of Islamic law have won the group headlines, residents say much of its power lies in its efficient and often deeply pragmatic ability to govern.

Syria’s eastern province of Raqqa provides the best illustration of their methods. Members hold up the province as an example of life under the Islamic “caliphate” they hope will one day stretch from China to Europe.

In the provincial capital, a dust-blown city that was home to about a quarter of a million people before Syria’s three-year-old war began, the group leaves almost no institution or public service outside of its control.

“Let us be honest, they are doing massive institutional work. It is impressive,” one activist from Raqqa who now lives in a border town in Turkey told Reuters.

In interviews conducted remotely, residents, Islamic State fighters and even activists opposed to the group described how it had built up a structure similar to a modern government in less than a year under its chief, Abu Bakr al-Baghdadi.

Reuters journalists are unable to visit the area for security reasons.

The group’s progress has alarmed regional and Western powers – last month U.S. President Barack Obama called it a “cancer” that must be erased from the Middle East as U.S. warplanes bombarded its positions in Iraq.

But Islamic State has embedded itself so thoroughly into the fabric of life in places like Raqqa that it will be all but impossible for U.S. aircraft – let alone Iraqi, Syrian and Kurdish troops – to uproot them through force alone.