A building in downtown Napa, Calif. is damaged after a 6.0-magnitude earthquake struck the area on August 24, 2014. (Twitter/Lyalldavenport)

The earthquake struck 4 miles northwest of American Canyon, California in Napa County at around 3:20 a.m. local time. The quake was felt over a large portion of northern California, including San Francisco, with the strongest shaking experienced in Napa, Solano and Sonoma Counties.

According to NBC News, the earthquake knocked out power to more than 50,000 people early Sunday. According to the San Francisco Chronicle there were reports of minor damage to westbound Highway 37, but so far there have been no reports of major damage to infrastructure or reports of injuries. 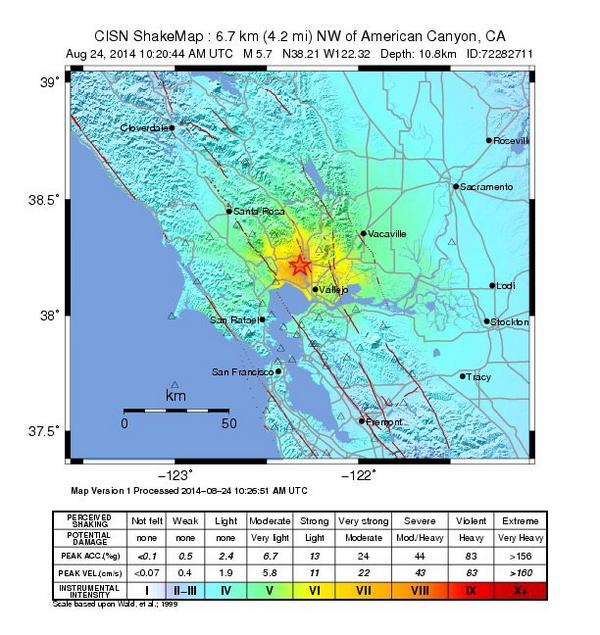 Strong shaking was reported and pictures across social media showed dishes thrown out of cabinets and wine knocked off the shelves of convenience stores.

People up playing poker at a 24-hour casino in American Canyon experienced a sudden jolt when the earthquake first hit.

“I didn’t know what to do,” Sunshine Hamilton, told the San Francisco Chronicle. “Everybody ran outside, so I ran outside too.”

But Skip Hutchins, a cashier at the casino, said the strong quake was nothing like the devastating 6.9-magnitude Loma Prieta earthquake, which killed 63 people, injured thousands and inflicted billions of dollars in damage.

“It wasn’t like the shaking I felt in ’89,” Hutchins told the San Francisco Chronicle. “It felt like more of a rolling.”

The Northern California Earthquake Data Center said that there was a 54 percent chance for a “strong and possibly damaging aftershock” in the next seven days and that there could be up to 70 small aftershocks during the same time period.