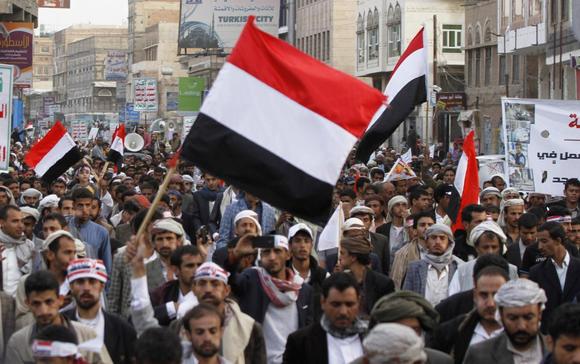 Protesters wave Yemeni national flags as they march during a demonstration organized by the Shi’ite Houthi movement to demand the government to rescind a decision to curb fuel subsidies in Sanaa August 21, 2014. RUETERS/Mohamed al-Sayaghi

(Reuters) – Tens of thousands of Yemenis demonstrated in the capital Sanaa on Friday in a protest called for by the Shi’ite Houthi movement, which wants the government to resign and reverse a decision on cutting fuel subsidies.

Earlier this week, the Houthis mobilized tens of thousands of supporters in Sanaa and warned they would resort to “legitimate pressure tactics” if authorities did not comply with their demands by Friday.

The Houthis have fought the government repeatedly since 2004 seeking more power for the Zaydi Sh’ite Muslim sect in north Yemen. They have been trying to tighten their grip on northern regions as the majority Sunni country moves toward a federal system that devolves more power to regions.

The unrest is another challenge to President Abd-Rabbu Mansour Hadi, who has struggled to restore stability to the U.S.-allied country next to major oil exporter Saudi Arabia and which is home to one of al Qaeda’s most active wings.

On Friday, the demonstrators gathered in a main street that leads to the airport, chanting “the people want the fall of the government” as well as slogans against cutting fuel subsidies.