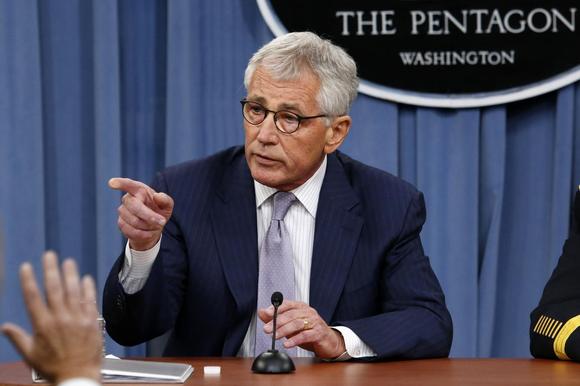 U.S. Secretary of Defense Chuck Hagel speaks during a press briefing at the Pentagon in Washington, August 21, 2014. REUTERS/Yuri Gripas

(Reuters) – The sophistication, wealth and military might of Islamic State militants represent a major threat to the United States that may surpass that once posed by al Qaeda, U.S. military leaders said on Thursday.

“They are an imminent threat to every interest we have, whether it’s in Iraq or anywhere else,” Defense Secretary Chuck Hagel told reporters at the Pentagon.

Hagel’s assessment of Islamic State, which gained strength during Syria’s civil war and swept into northern Iraq earlier this summer, sounded a note of alarm several days after the group posted a video on social media showing one of its fighters beheading an American hostage kidnapped in Syria.

Asked if the hardline Sunni Muslim organization posed a threat to the United States comparable to that of the attacks of Sept. 11, 2001, Hagel said it was “as sophisticated and well-funded as any group we have seen.”

“They are beyond just a terrorist group. They marry ideology, a sophistication of … military prowess. They are tremendously well-funded. This is beyond anything we’ve seen.”

Hagel spoke as the United States continued attacking Islamic State targets in Iraq. In the past two weeks, U.S. drones and fighter jets have conducted 89 airstrikes against militant targets in northern Iraq.

So far, President Barack Obama has sought to limit his renewed military campaign in Iraq to protecting American diplomats and civilians under direct threat. Obama ended the war in Iraq that killed thousands of American soldiers and consumed U.S. foreign policy for nearly a decade,

Even after the gruesome killing of U.S. journalist James Foley, Obama is seen as unlikely to deepen his near-term military involvement in either Iraq or Syria as he seeks to avoid becoming embroiled in another messy Middle Eastern conflict.

But U.S. officials say they have not ruled out escalating military action against Islamic State, which has increased its overt threats against the United States since the air campaign in Iraq began.

“We haven’t made a decision to take additional actions at this time, but we truly don’t rule out additional action against ISIL if it becomes warranted,” Ben Rhodes, a senior Obama aide, told National Public Radio earlier on Thursday, using another name for Islamic State.

General Martin Dempsey, chairman of the U.S. Joint Chiefs of Staff, said officials were worried about the possibility that European or U.S. nationals, radicalized after fighting in Iraq or Syria, would return to their home countries.

Dempsey suggested Islamic State would remain a danger until it could no longer count on safe havens in areas of Syria under militant control.

“This is an organization that has an apocalyptic, end-of- days strategic vision and which will eventually have to be defeated,” Dempsey said.

“To your question, can they be defeated without addressing that part of their organization which resides in Syria? The answer is no. That will have to be addressed on both sides of what is essentially at this point a non-existent border.”

2 thoughts on “Islamic State threat ‘beyond anything we’ve seen’: Pentagon”