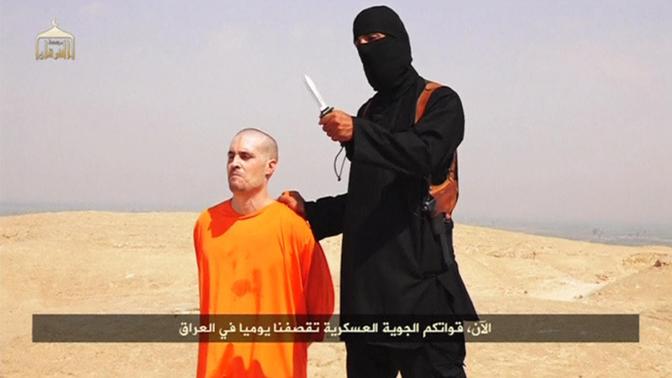 A masked Islamic State militant holding a knife speaks next to man purported to be U.S. journalist James Foley at an unknown location in this still image from an undated video posted on a social media website. REUTERS/Social Media Website via REUTERS TV

(Reuters) – Islamic State insurgents posted a video on Tuesday purportedly showing the beheading of U.S. journalist James Foley and images of another U.S. journalist whose life they said depended on how the United States acts in Iraq.

The video, titled “A Message To America,” presented President Barack Obama with bleak options that could define America’s next phase of involvement in Iraq and the public reaction to it, potentially deepening his hand in a conflict he built much of his presidency on ending.

While the video had yet to be verified, its grisly message was unambiguous, warning of greater retaliation to come against Americans following nearly two weeks of U.S. air strikes that have pounded militant positions and halted the advance of Islamic State, which until this month had captured a third of Iraq with little resistance.

The video, posted on social media, brought a chilling and highly personal tone to a conflict that for many Americans had started to become all too familiar.

Foley, 40, was kidnapped by armed men on Nov. 22, 2012, in northern Syria while on his way to the Turkish border, according to GlobalPost, a Boston-based online publication where Foley had worked as a freelancer. He had reported in the Middle East for five years and had been kidnapped and released in Libya.

Steven Sotloff, who appeared at the end of the video, went missing in northern Syria while reporting in July 2013. He has written for TIME among other news organizations.

The video injected an unpredictable element into Obama’s deliberations on how far to proceed with U.S. air strikes against Islamic State targets in Iraq, though aides said his vow not to put U.S. combat forces on the ground in Iraq still held.

“We have seen a video that purports to be the murder of U.S. citizen James Foley by ISIL,” White House National Security Council spokeswoman Caitlin Hayden said in a statement. “The intelligence community is working as quickly as possible to determine its authenticity.”

“If genuine, we are appalled by the brutal murder of an innocent American journalist and we express our deepest condolences to his family and friends,” she said.

A Twitter account set up by Foley’s family in Rochester, New Hampshire, to help find him said, “We know that many of you are looking for confirmation or answers. Please be patient until we all have more information, and keep the Foleys in your thoughts and prayers.”

Islamic State had not previously executed American citizens publicly. The video was posted after the United States resumed air strikes in Iraq this month for the first time since the end of the U.S. occupation in 2011.