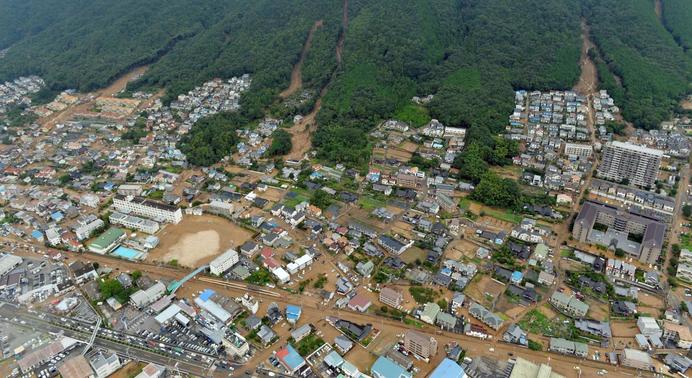 An aerial view shows several landslides that swept through a residential area at Asaminami ward in Hiroshima, western Japan, in this photo taken by Kyodo August 20, 2014. Mandatory credit REUTERS/Kyodo

(Reuters) – At least eight people were killed in Japan on Wednesday when landslides touched off by torrential rain slammed into the outskirts of the city of Hiroshima, media reported.

At least 13 people were also missing after a month’s worth of rain fell overnight, loosening slopes already saturated by heavy rain over the past few weeks.

“There was rain and thunder all night, beating down so hard I was scared to go outside,” a resident told Fuji TV. “Great big drops. I’ve never seen anything like this.”

Helicopters clattered overhead as rescue workers searched through mud and piles of stones in residential areas about 5 km (3 miles) from the center of the city.