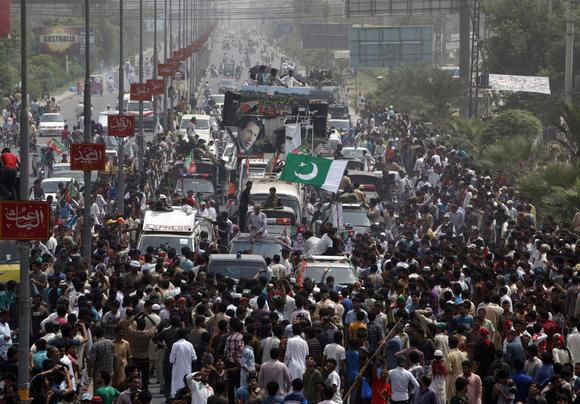 (Reuters) – More than 20,000 anti-government protesters flooded the center of Pakistan’s capital on Saturday, vowing to stay in the streets until Prime Minister Nawaz Sharif resigns.

The numbers were far below what protest organizers expected, but the power of protesters to paralyze the central business district has presented the biggest challenge yet to the 15-month-old civilian government.

The unrest has raised questions about Pakistan’s stability, at a time when the nuclear-armed nation of 180 million is waging an offensive against Pakistani Taliban militants and when the influence of anti-Western and sectarian groups is growing.

Riot police cordoned off two streets in downtown Islamabad with shipping containers and barbed wire for the protests. Protest organizers say they are peaceful but determined.

“We want Pakistan to be a peaceful state through our democratic revolution,” populist cleric Tahir ul-Qadri told his followers in a short speech.

His supporters were adamant they would not leave until Qadri told them to. Most of the men carried stout sticks a few feet long. Brigades of men and women in fluorescent jackets had gas masks, swimming goggles and bottles of water.

“We are here to disarm the gas shells,” explained one.

Qadri, a cleric and political activist who usually lives in Canada, controls a network of schools and Islamic charities.

He wants the prime minister to resign and a new government of technocrats installed. He promises his supporters he will crack down on corruption, and generate enough funds to pay for homes, jobs, cheap energy and water.

“Once corruption is eradicated, the country can move forward. It is the only thing holding us back,” said 15-year-old Umme Habiba, a vivacious student with dimples and long black robes who said she came with her whole family.