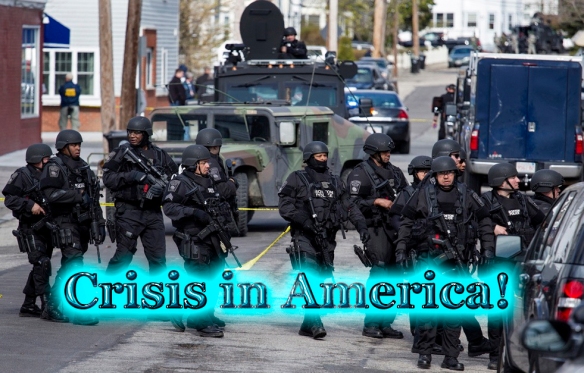 What in the world is happening in America today?  We see the violence increasing, in both the civilian population as well as in those sworn to protect us, the police, the government!

We have recently heard about the shooting of a black teenager in Ferguson Missouri.  What caused the police officer to shot this young man?  I have heard that the teen was struggling with the officer, perhaps he was reaching for his gun?  Who knows for sure what really happened and what the reasoning of the police officer was.

It happened, and we cannot change that.  But why did it happen?  Why have so many black citizens in this community responded with violence and evil?  We see the militarized police force taking action, with fully armed swat units, canine dogs, tear gas.  They sure seem to be ready for such an incident to occur, almost as if they predicted it to happen!

In the past few years we have seen our government, both Federal and City, form military style police forces.  We have seen them acquire military vehicles, weapons, and armor.  Why?  For what reason, and why now?

Why the massive build-up of the Department of Homeland Security?  Purchasing massive amounts of ammunition, military vehicles and weapons.  FEMA building hundreds of prison camps around the nation.

President Obama enacting several invasive and oppressive laws against the American people, such as the right of the government to detain an American citizen indefinitely without cause (“Indefinite Detention Act,”); making it illegal for peaceful protests anywhere the secret service is present (HR 347); government memos approving the use of unmanned drones to kill Americans on American soil (President Barack Obama has the authority to use an unmanned drone strike to kill US citizens on American soil, his attorney general has said.  SOURCE).  Such laws give the government full power over the American people, oppressive power, taking away our rights and liberties given to us in the Constitution.

Think this government build-up just ahead of all the increased violence in America is just a coincidence?  Remember what many Democratic leaders have said over and over, “Never let a disaster go to waste!”.  Why in the world would they say that?  In order to make changes to the government and society that’s why!  With each disaster comes the opportunity for them to create new laws, to change the way society thinks and breathes.  This is exactly what is happening now in America, and it was planned ahead of time.  The beginning of a “New World Order”.

Do you think that the incident with the 18 year old black teen who was shot and killed by the police was just another incident?  Or do you think maybe it was planned?  I’m not sure, but I do know that the government was ready for the outcome!  I know that they have been preparing for such events just a few short years ago.  It seems like to much of a coincidence to me.

I believe that we will see many more incidents of this nature.  I believe that they will be much worse than this.  We will see martial law imposed, Americans held in detention camps, and the militarized police taking control.  It’s not a matter of if, but of when and how soon.

The world is an ugly place my friends.  America is turning into an ugly place.  The time for prayer is now!  Pray for America, for our leaders, for our protection, and for the salvation of the lost.  The time is now!

God Bless my friends, until next time!

5 thoughts on “The Fate of America”