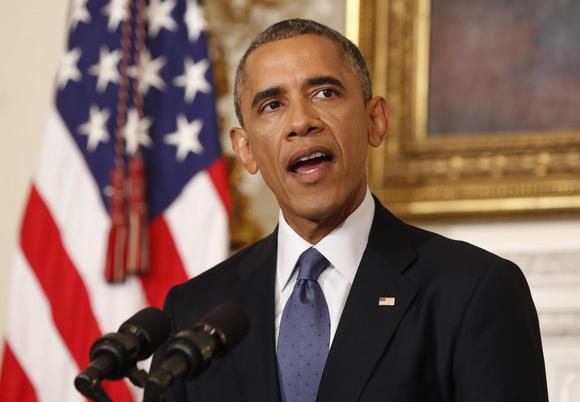 U.S. President Barack Obama talks about the humanitarian relief situation in Iraq, at the State Dining Room of the White House in Washington August 7, 2014. REUTERS/Larry Downing

(Reuters) – U.S. President Barack Obama said on Thursday he has authorized air strikes against Islamist militants in Iraq to protect American personnel and launched humanitarian assistance to prevent a genocide of members of a religious minority who have fled their homes.

The president, in remarks carried live over network television, said he has begun operations to assist Iraqis stranded on a mountain to escape the advancing forces of the Islamist State, which have swept across northern Iraq in recent weeks.

“When we face a situation like we do on that mountain, with innocent people facing the prospect of violence on a horrific scale, when we have a mandate to help in this case a request from the Iraqi government, and when we have the unique capabilities to help avert a massacre, then I believe the United States of America cannot turn a blind eye,” Obama said.

“We can act carefully and responsibly to prevent a potential act of genocide,” he said.

Obama said he had authorized the U.S. military to take targeted strikes against militants if they advanced toward the Kurdish capital of Arbil or threatened Americans anywhere in the country.

“We intend to stay vigilant and take action if these terrorist forces threaten our personnel or facilities anywhere in Iraq, including our consulate in Arbil and our embassy in Baghdad.” he said.