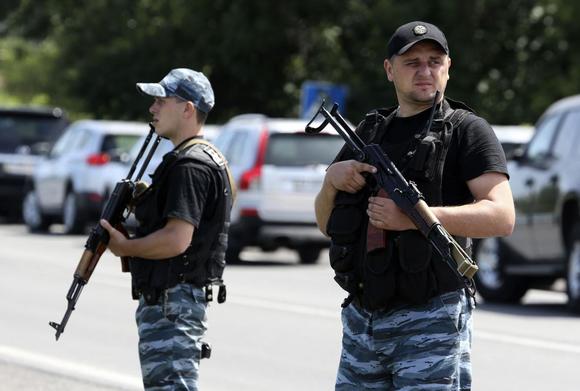 (Reuters) – Intense fighting between Ukrainian troops and pro-Russian rebels in eastern Ukraine killed dozens of civilians, soldiers and rebels, as Kiev pressed on with an offensive on Tuesday including near the wreckage of Malaysian flight MH17.

Shells hit the centre of Donetsk, a city with a pre-war population of nearly a million people where residents fear they will be trapped on a battlefield between advancing Ukrainian troops and Russian-backed rebels who have vowed to make a stand.

In Brussels, European officials met to discuss imposing the first broad-based sanctions aimed at sectors of the Russian economy, a step that would start a new phase in the biggest confrontation between Russia and the West since the Cold War.

Ukrainian forces have been pushing rebel units back towards their two main urban strongholds of Donetsk and Luhansk and have sought to encircle them in several places.

The government says its forces have retaken several villages in the rolling countryside near where the airliner crashed on July 17, killing all 298 passengers, most of them Dutch.

In Donetsk, the body of a dead man lay in rubble behind a badly damaged 10-storey residential building close to the city centre, hit by shelling. The side of the building was splintered. Rebels at the scene placed body parts on a nylon sheet and carried it on a stretcher to a green van.

Another middle aged woman, who gave her name as Katarina, charged out of the building next door carrying two bags.

“No more! I cannot live in this death row any more!” she said. “I am leaving! I don’t know where!”