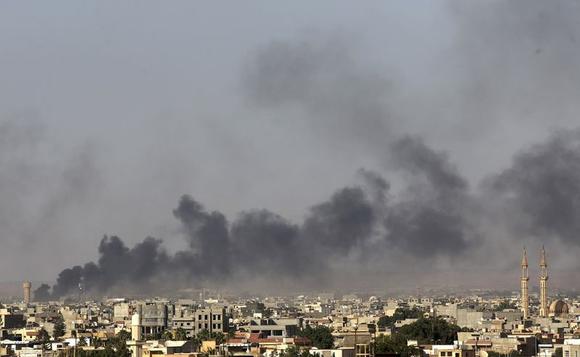 Black plumes of smoke is seen in the vicinity of Camp Thunderbolt, after clashes between militants, former rebel fighters and government forces in Benghazi July 26, 2014. REUTERS/Esam Omran Al-Fetori

(Reuters) – At least 36 people were killed in Libya’s eastern city of Benghazi, many of them civilians, in clashes between Libyan Special Forces and Islamist militants on Saturday night and Sunday morning, medical and security sources said.

Another 23 people, all Egyptian workers, were killed in the capital Tripoli when a rocket hit their home on Saturday during clashes between rival militias battling over the city’s main airport, the Egyptian state news agency reported.

In the last two weeks, Libya has descended into its deadliest violence since the 2011 war that ousted Muammar Gaddafi, prompting the United States, the United Nations and Turkey to pull diplomats out of the North African country.

With the central government unable to impose order, two rival militias are exchanging rocket and artillery fire in Tripoli, while army units are trying to push out Islamist militants who have set up camps on the outskirts of Benghazi.

The United States evacuated its embassy in Libya on Saturday, driving diplomats across the border into Tunisia under heavy military protection after escalating clashes broke out near the embassy compound in Tripoli.