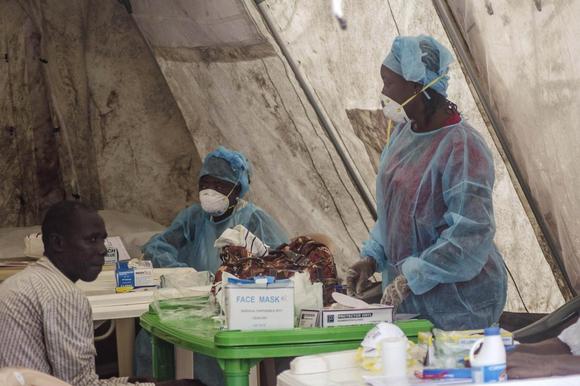 (Reuters) – Police were guarding an Ebola treatment center in Sierra Leone on Saturday, the day after thousands marched on the clinic following allegations by a former nurse the deadly virus was invented to conceal “cannibalistic rituals” there, a regional police chief said.

Across Guinea, Liberia and Sierra Leone, at least 660 people have died from the illness, according to the World Health Organisation, placing great strain on the health systems of some of Africa’s poorest countries.

The virus is still spreading. A Liberian man who died in Nigeria’s commercial capital, Lagos, tested positive for the virus on Friday, Nigeria’s health minister said.

Sierra Leone now has the highest number of cases, at 454, surpassing neighboring Guinea where the outbreak originated in February.

Angry crowds gathered on Friday outside the country’s main Ebola hospital in Kenema in the West African country’s remote east where dozens are receiving treatment for the virus, and threatened to burn it down and remove the patients.

Residents said police fired tear gas to disperse the crowds and that a 9-year-old boy was shot in the leg by a police bullet.

Assistant Inspector General Alfred Karrow-Kamara said on Saturday the protest was sparked by a former nurse who had told a crowd at a nearby fish market that “Ebola was unreal and a gimmick aimed at carrying out cannibalistic rituals”.