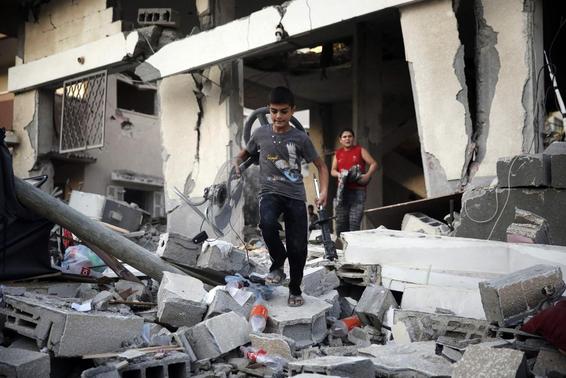 (Reuters) – Palestinians rushed to shops and banks on Thursday as a five-hour humanitarian truce agreed by Israel and Hamas came into force, hours after the Israeli military said it had fought off gunmen who infiltrated from Gaza.

During the ceasefire, air raid sirens went off briefly in southern Israel and the military said three mortars landed in open areas, but the truce appeared to be generally holding. No group in Gaza claimed responsibility for the mortar fire and there were no reports of Israeli retaliation.

Hours before the truce began, about a dozen Palestinian fighters tunnelled under the border, emerging near an Israeli community. At least one was killed when Israeli aircraft bombed the group, the military said.

The break in 10 days of fighting was requested by the United Nations to allow residents of the Gaza strip, ruled by the Hamas group viewed by Israel as terrorists, to gather supplies and repair damage to infrastructure such as water mains and power.

Gaza health officials say at least 224 Palestinians, mostly civilians, have been killed. In Israel, one civilian has been killed by fire from Gaza, where the Israeli military says more than 1,300 rockets have been launched into the Jewish state.

The strikes have made a race to shelters a routine for hundreds of thousands of people.

Israel’s military, which government officials said was poised to expand its air and naval bombardments into possible ground operations, said it would respond “firmly and decisively” if militants launched attacks during the truce.

In Gaza City, hundreds of Palestinian lined up outside banks to collect salaries paid directly into their accounts, while others went food shopping. Gaza roads almost deserted over days of conflict were filled again with traffic.

“We are here to get paid. Thank God for the calm and we hope it lasts,” said Zakaria Ahmed, 35. “We hope Egypt brings a good truce, we hope the killing will stop and (Gaza’s border) crossings will open.”

There was also relief in Israel. In the southern Israeli town of Ashkelon, which has been under constant rocket fire, families strolled through the streets after remaining at home for the past week.