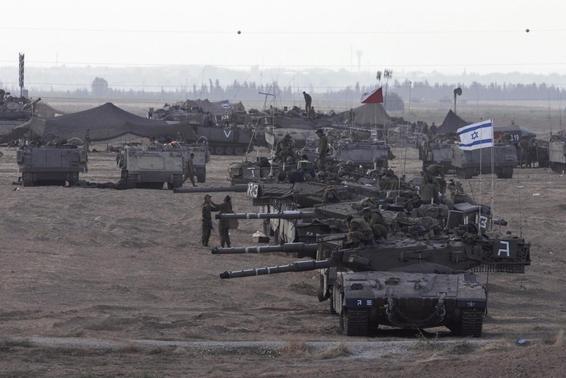 (Reuters) – Israel resumed air strikes in the Gaza Strip on Tuesday, six hours after agreeing to an Egyptian-proposed truce that failed to halt Hamas rocket attacks.

“Hamas has fired 47 rockets since we suspended our strikes in Gaza (this morning). As a result, we have resumed our operation against Hamas,” an Israeli military statement said.

Under a blueprint announced by Egypt – Gaza’s neighbour and whose military-backed government has been at odds with Hamas Islamists – a mutual “de-escalation” of week-old fighting was to have begun at 9 a.m. (0600 GMT), with hostilities ceasing within 12 hours.

Hamas’ armed wing, the Izz el-Deen al-Qassam Brigades, rejected the ceasefire, saying its battle with Israel would “increase in ferocity and intensity”.

But Moussa Abu Marzouk, a top Hamas official who was in Cairo, had said the movement, which is seeking a deal that would ease border restrictions imposed by both Egypt and Israel, had made no final decision on the proposal.

Live television showed Israel’s Iron Dome anti-missile system intercepting several rockets over the port city of Ashdod, where a factory was hit. Emergency services said no one was hurt.

Sirens also sounded in areas up to 130 kilometers (80 miles)north of the Gaza Strip. The Qassam Brigades claimed responsibility for some of the rocket launchings.

Speaking in Vienna, U.S. Secretary of State John Kerry supported Israel: “I cannot condemn strongly enough the actions of Hamas in so brazenly firing rockets, in multiple numbers, in the face of a goodwill effort (to secure) a ceasefire.”

Gaza health officials said at least 184 Palestinians, most of them civilians, have been killed in eight days of fighting, the worst Israel-Palestinian flare-up in two years.

Prime Minister Benjamin Netanyahu, whose security cabinet voted 6-2 earlier on Tuesday to accept the truce, had cautioned that Israel would respond strongly if rockets continued to fly.

An Israeli official, speaking as the Israeli strikes resumed, said: “The prime minister and the defense minister have ordered the Israeli armed forces to take powerful action against terrorist targets in Gaza.”

Earlier, Sami Abu Zuhri, a Hamas spokesman in Gaza, said that demands the movement has made must be met before it lays down its weapons.

Palestinian President Mahmoud Abbas, who reached an agreement with Hamas in April that led to the formation of a unity government last month, urged acceptance of the proposal, the official Palestinian news agency WAFA said.