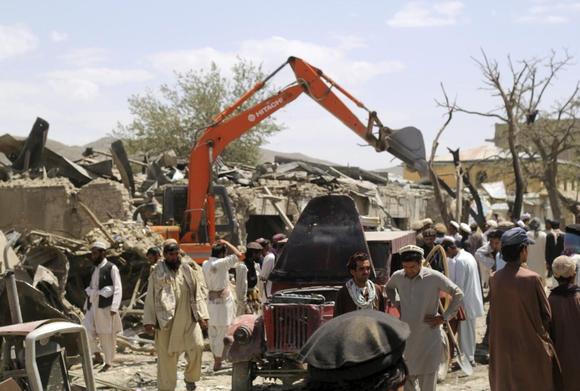 Villagers gather at the site of a car bomb attack in Urgon district eastern province of Paktika July 15, 2014.   REUTERS/Stringer

(Reuters) – A car packed with explosives exploded on Tuesday as it sped through a crowded market in Afghanistan’s eastern province of Paktika, killing at least 89 people, officials said, one of the most violent attacks in the country in a year.

The huge explosion took place not far from the porous border with Pakistan’s North Waziristan region, where the military has been attacking hideouts of the Pakistani Taliban in the past few weeks, prompting militants to retreat towards Afghanistan.

The attack comes at an uneasy time in Afghanistan as the country recounts votes from a disputed presidential election which the Taliban have vowed to disrupt.

But the Taliban distanced themselves from Tuesday’s attack. The movement’s leader have ordered militants not to target civilians.

“The truth behind this attack will become clear after an investigation, but we clearly announce that it was not done by the Mujahedeen of the Islamic Emirate of Afghanistan,” Zabihullah Mujahid, a Taliban spokesman, said in a statement.