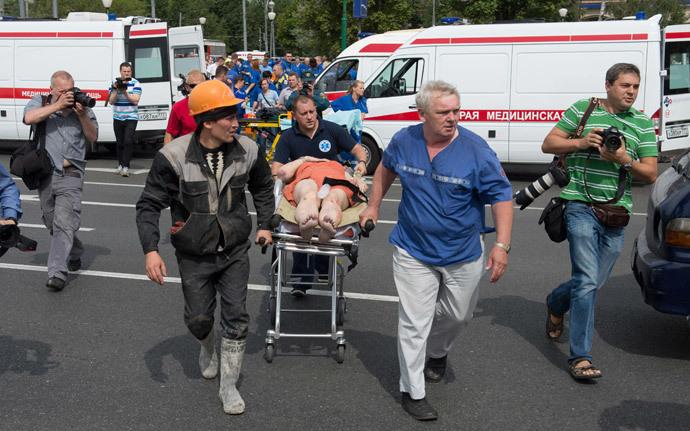 (SOURCE)  20 people have been killed and over 160 injured as several subway cars derailed on the Moscow Metro on the Arbatsko-Pokrovskaya dark blue Metro line on Tuesday morning.

“Currently seven dead bodies have been passed to the investigators and are now in the entrance hall,” said Aleksandr Gavrilov, deputy head of Moscow’s Emergencies Service (Emercom).

“Those are four men and three women. There are six bodies remaining in the first carriage, and six more in the second one.”

Moscow authorities have declared Wednesday a day of mourning for those who died in the accident.

One hundred and twenty-nine people have been taken to hospital by 110 ambulances, according to the deputy head of the Moscow government healthcare department, Aleksey Khripun.

“All of the injured have arrived to hospitals alive, but one severely injured woman died in 71st hospital,” Khripun said, as cited by ITAR-TASS.

A total of 1,150 people have been evacuated from the site of the accident, according to press service of the Moscow Emercom branch.

The driver of the derailed train, who was earlier reported dead, is actually alive and being treated in hospital, Moscow authorities say, according to RIA Novosti.

Investigators have been looking into all possible theories of how the accident could have occurred, ruling out a terrorist act, spokesman for the Russian Investigative Committee, Vladimir Markin said at a press conference.

“No signs of terrorist act are being seen. It’s most likely a technological accident,” Markin said.

“There can be several reasons: failed switch, rail subsidence, because there are construction works in a tunnel nearby. We will consider the possibility of the carriage itself being defective – anything that will emerge during the investigation,” Markin said.