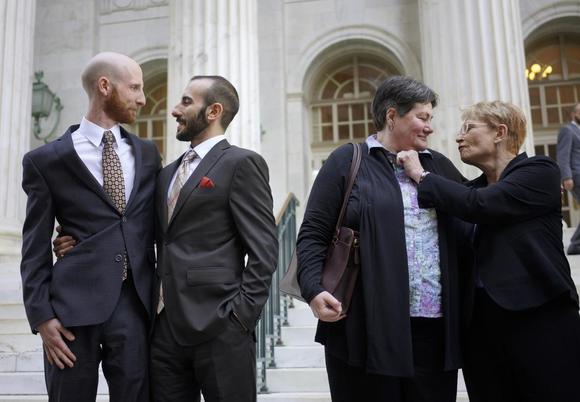 (Reuters) – A U.S. appeals court ruled on Wednesday that conservative Utah may not ban gay couples from marrying, a decision that capped a day of victories for same-sex nuptials and nudges the issue closer to the U.S. Supreme Court.

The ruling by a panel of the U.S. Court of Appeals for the Denver-based 10th Circuit marked the first time that a regional appeals court has made such a decision in the year since the Supreme Court ordered the federal government to extend benefits to legally married same-sex couples.

The decision came as a federal district judge in Indiana joined a growing chorus of jurists who have struck down state gay marriage bans as unconstitutional in rulings that could substantially expand U.S. gay marriage rights if upheld.

“A state may not deny the issuance of a marriage license to two persons, or refuse to recognize their marriage, based solely upon the sex of the persons in the marriage union,” the 10th Circuit said in its 2-1 ruling on Utah.

But the panel placed its ruling on hold pending anticipated legal challenges. Utah Governor Gary Herbert, a Republican, said he was disappointed, and the state attorney general’s office said it would appeal to the U.S. Supreme Court.

“All Utahns deserve clarity and finality … and that will only come from the Supreme Court,” Herbert said in a statement.

The Mormon church, which wields big political and social influence in Utah, said in a statement it had always supported traditional marriage and hoped the nation’s highest court would uphold that view.

Supporters of same-sex marriage gathered at a park in the shadow of the Mormon church’s downtown Salt Lake City headquarters Wednesday evening to celebrate.

“It’s one step closer to equal rights,” said Maggie Snyder, 60, who married her 73-year-old partner, Kristen Reis, last fall in California. “We never thought that we would live to see this happen.”