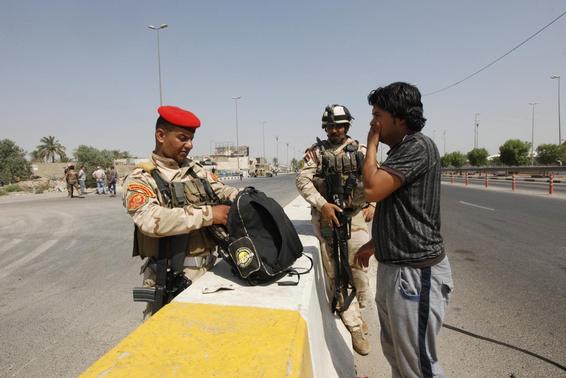 (Reuters) – Iraqi government forces battled Sunni rebels for control of the country’s biggest refinery on Thursday as Prime Minister Nuri al-Maliki waited for a U.S. response to an appeal for air strikes to beat back the threat to Baghdad.

The sprawling Baiji refinery, 200 km (130 miles) north of the capital near Tikrit, was a battlefield as troops loyal to the Shi’ite-led government held off insurgents from the Islamic State of Iraq and the Levant and its allies who had stormed the perimeter a day earlier, threatening national energy supplies.

A government spokesman said around noon (0900 GMT) that its forces were in “complete control” but a witness in Baiji said fighting was continuing and ISIL militants were still present.

A day after the government publicly appealed for U.S. air power, there were indications Washington is sceptical of whether that would be effective, given the risk of civilian deaths that could further enrage Iraq’s once dominant Sunni minority.

Turkish Prime Minister Tayyip Erdogan, a NATO ally, said the United States “does not view such attacks positively”, given the risk to civilians – a view some U.S. officials have also expressed. A Saudi source said that Western powers agreed with Riyadh, the main Sunni power in the region, that what was needed was political change, not outside intervention, to heal sectarian division that has widened under Maliki.

Video aired by Al-Arabiya television showed smoke billowing from the plant and the black flag used by ISIL flying from a building. Workers who had been inside the complex, which spreads for miles close to the Tigris river, said Sunni militants seemed to hold most of the compound in early morning and that security forces were concentrated around the refinery’s control room.

The 250-300 remaining staff were evacuated early on Thursday, one of those workers said by telephone. Military helicopters had attacked militant positions overnight, he added.