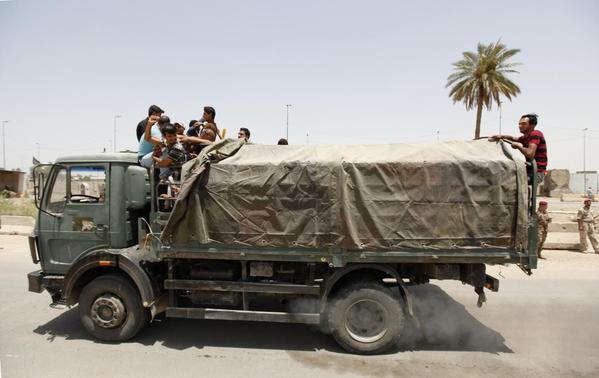 Volunteers who have joined the Iraqi army to fight against the predominantly Sunni militants, who have taken over Mosul and other Northern provinces, travel in an army truck, in Baghdad, June 12, 2014.    Credit: Reuters/Ahmed Saad

(SOURCE)   (Reuters) – Iraqi Kurds took control of the northern oil city of Kirkuk on Thursday after government forces abandoned their posts in the face of a sweeping Sunni Islamist rebel push towards Baghdad that threatens Iraq’s future as a unified state.

Peshmerga fighters, the security forces of Iraq’s autonomous Kurdish north, swept into bases in Kirkuk vacated by the army, a peshmerga spokesman said.

“The whole of Kirkuk has fallen into the hands of peshmerga,” said Jabbar Yawar. “No Iraqi army remains in Kirkuk now.”

Kurds have long dreamed of taking Kirkuk and its huge oil reserves. They regard the city, just outside their autonomous region, as their historical capital, and peshmerga units were already present in an uneasy balance with government forces.

The swift move by their highly organised security forces to seize full control demonstrates how this week’s sudden advance by fighters of the Al Qaeda offshoot Islamic State of Iraq and the Levant (ISIL) has redrawn Iraq’s map.

Since Tuesday, black clad ISIL fighters have seized Iraq’s second biggest city Mosul and Tikrit, home town of former dictator Saddam Hussein, as well as other towns and cities north of Baghdad. They continued their lightning advance on Thursday, moving into towns just an hour’s drive from the capital.

The army of the Shi’ite Prime Minister Nuri al-Maliki’s government in Baghdad has essentially fled in the face of the onslaught, abandoning buildings and weapons to the fighters who aim to create a strict Sunni Caliphate on both sides of the Iraq-Syria frontier.

The stunning advance of ISIL, effectively seizing northern Iraq’s main population centres in a matter of days, is the biggest threat to Iraq since U.S. troops withdrew in 2011. Hundreds of thousands of people have fled their homes in fear.

The administration of President Barack Obama has come under fire for failing to do enough to shore up the government in Baghdad before pulling out its troops. Security and police sources said Sunni militants now controlled parts of the small town of Udhaim, 90 km (60 miles) north of Baghdad, after most of the army troops left their positions and withdrew towards the nearby town of Khalis.

“We are waiting for supporting troops and we are determined not to let them take control. We are afraid that terrorists are seeking to cut the main highway that links Baghdad to the north,” said a police officer in Udhaim.