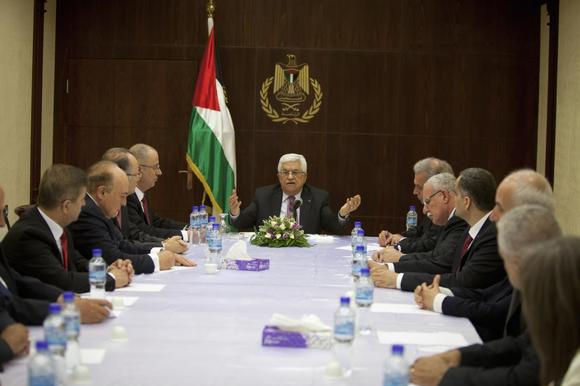 (Reuters) – The European Union will work with the new Palestinian unity government, on condition it sticks to the principle of peace with Israel based on a two-state solution, it said on Tuesday.

The U.S. administration has already said it would work with the unity government that Palestinian President Mahmoud Abbas swore in on Monday under a reconciliation deal with Hamas, an Islamist group that advocates Israel’s destruction.

Setting a policy in line with U.S. and EU demands, the Western-backed Palestinian leader said his administration would honor agreements that underlie the stalled peace process with Israel.

“We welcome … the declaration by President Abbas that this new government is committed to the principle of the two state solution based on the 1967 borders, to the recognition of Israel’s legitimate right to exist,” the EU said in a statement.

“The EU’s engagement with the new Palestinian government will be based on its adherence to these policies and commitments,” it said.

Israel renewed its criticism of the unity government.

“Hamas is a ruthless terrorist organization responsible for the murder of countless innocent civilians and an organization that says my country Israel should be destroyed,” Mark Regev, spokesman for Prime Minister Benjamin Netanyahu, said on Tuesday.

“People who want peace, people who want reconciliation here in the Middle East should be calling upon the Palestinian leadership to annul this pact with Hamas and to return to peace talks.” He did not directly refer to the EU position.

Israel’s intelligence minister said the notion that the new cabinet was made up of technocrats rather than politicians – something that made it diplomatically easier for the West to deal with it – was bogus.

“You cannot present it internally as a Hamas government and present it on the outside as a technocrats’ government,” Yuval Steinitz told Army Radio.

“If these people are identified with Hamas, or are people with whom Hamas identifies and were appointed by Hamas then these are Hamas representatives.”

1 thought on “EU open to working with Palestinian unity government”