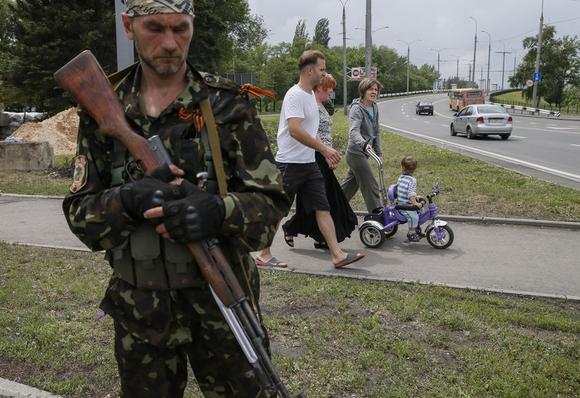 A pro-Russian rebel from the Vostok Battalion stands guard at checkpoint in Donetsk June 1, 2014. REUTERS/Gleb Garanich

(Reuters) – A fierce battle was underway on Monday in Ukraine’s rebellious east after a pro-Russian militia attacked a Ukrainian border post with automatic weapons and grenade launchers in the early hours.

sources said a force of separatists had occupied the upper floors of a nearby apartment block and were shooting into the border post on the southern edge of Luhansk, a city very close to the frontier with Russia.

“Shooting is continuing. There has been no let-up in firing for seven hours now,” border post spokesman Oleh Slobodin said.

“We have 8 or 9 wounded. The attackers have five dead and 8 wounded,” he said.