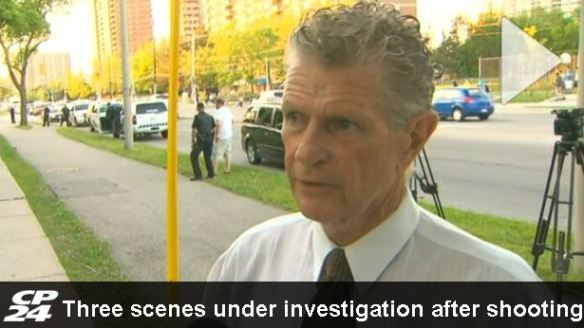 (SOURCE)    Four people were injured in what has been described as a “running gun battle” in Etobicoke’s Rexdale neighbourhood Friday night.

Police were initially called to 1 Mt. Olive Dr., near Kipling and Finch avenues, at around 6:45 p.m. Friday after reports of a shooting.

Toronto EMS say they transported one male, who is in serious but stable condition, to a trauma centre and a female, who has non life-threatening injuries, to a local hospital.

The male victim sustained a gunshot wound to the hip and the female was wounded in the ankle, according to Toronto EMS.

An area around the emergency department at the hospital has been cordoned off with police tape but the ER is still open.

Officers are also investigating a scene on Martin Grove Road that police believe is linked to the shooting.

Police have described one suspect as a black male with a silver handgun.

Investigators say they are looking for both witnesses and suspects involved in the ongoing investigation.

Sunnybrook Hospital has confirmed that the emergency department is in lockdown but would not say if it is related to the Rexdale shooting.